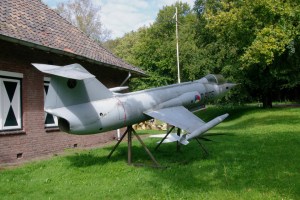 A model of an American jet fighter was stolen from the small Dutch Museum Vliegbasis Deelen, according to the Associated Press. With all the scrap metal thefts going on right now, the museum is hoping the missing jet is just a prank and that its fate does not rest in a junkyard somewhere.

They have reason to believe the theft was just a joke, though. A note was left behind that said: “Fly away. See you next year.” One hopes!

More mysterious, however, is how the thieves walked off with the thing (the museum is referring to the incident as a “jetnapping”). It is 33 feet long and weighs about 1,100 pounds.

Edwin van Brakel, the museum’s chairman, told the AP, “It would not fit in the back of a Fiat 500.”