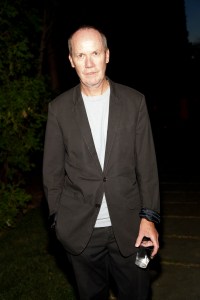 James Rizzi, a Brooklyn-born artist known for whimsical, cartoon-like work, died at the age of 61 while sleeping in his SoHo studio. Notes Kerry Wills of the New York Daily News, “His playful pastel images adorned everything from Volkswagen cars to Rosenthal china, Lufthansa jets and German postage stamps.” [NYDN]

Artist Daniel Arsham discusses creating sets for the Merce Cunningham Dance Company, which will disband after three final shows at the Park Avenue Armory tomorrow, Friday and Saturday. Mr. Arsham, who began working with the group in 2007, said: “It’s a momentous occasion, and it freaks me out a little bit… Merce meant a lot to me personally in giving me this opportunity, which was, frankly, insane to give a 25-year-old.” [NYT]

Sori Yanagi, a Japanese industrial designer known for simple, elegant and curving designs, died at the age of 96. Discussing design, Mr. Yanagi once said, “The fundamental problem is that many products are created to be sold, not used.” [Los Angeles Times]

Randy Kennedy writes about the state of appropriation in contemporary art and updates the status of the ongoing Richard Prince-Patrick Cariou copyright suit. Mr. Prince has lawyered up and is appealing the judgment against him. Mr. Kennedy cites this choice question from one of the plaintiff’s lawyers to Mr. Prince, about the imagery in the work in question: “So what are four lesbians from the early 20th century doing on St. Bart’s in, now, when there’s a nuclear war, like why are they there?” The artist’s response: “Your guess is as good as mine. That’s what I do, I make things up.” [NYT]

Jonathan Jones dissects an intricate drawing of the anatomy of the neck by Leonardo da Vinci, complete with a zoomable image of the work. [Guardian]

British artist Tracey Emin told BBC Radio 4 that her decision to vote for Prime Minister David Cameron, who is a conservative, has caused her some grief from colleagues in the art industry. “In the world I live in, people never vote Tory,” she said. Some people, she added, have been “abusive.” [Telegraph]

The 104-year-old Brazilian architect Oscar Niemeyer did not take a day off on his recent birthday, and he continues to work until 7 p.m. every evening. “I still have good health and an almost youthful enthusiasm for architectural production,” he told the Brazilian paper Correio Braziliense. “It stimulates me tremendously.” [Artforum]