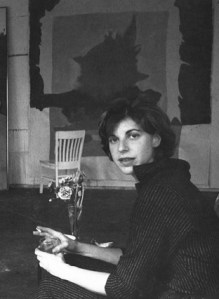 Painter Helen Frankenthaler died yesterday at the age of 83, and The New York Times published an obituary by Grace Glueck, which featured an anecdote about a time that Ms. Frankenthaler danced with John Travolta at the White House. It’s well worth a read. This morning, we take a look at the tributes, complete with a few jabs, in other publications.

Over on Artnet, Charlie Finch declares that Ms. Frankenthaler “was another one of those painters who, like the recently deceased George Tooker, basically made one painting,” Mountains and Sea (1952)—which, he writes, “inspired so many lazy imitations in studios across the world, including that of Frankenthaler herself.” [Artnet]

Jerry Saltz is a great deal more positive, musing that Ms. Frankenthaler “may have been the first artist not regularly referred to, demeaned, neutralized, and made safe with the label ‘woman artist,'” and says that she “was often belittled, her work called merely decorative.” [NYMag]

Speaking of, Bloomberg’s new critic, Lance Esplund writes that “[t]he openness in Frankenthaler’s work at times can be too thin and merely decorative. The lack of meat and structure can give the impression of something wishy-washy.” That sounds, to our ear, like fair criticism. He also notes the precarious state of her legacy, given the recent closure of her gallery, Knoedler & Co. [Bloomberg]

The Wall Street Journal‘s Eric Gibson, who has perhaps the most complete summation of the progression of Ms. Frankenthaler’s art and career, has similar concerns. “There hasn’t been a full-dress retrospective in more than 20 years, and her gallery, Knoedler & Co., suddenly closed last month, leaving no forum for the regular exposure of her work,” he writes. “She deserves better. Greatness abhors a vacuum.” [WSJ]

Roberta Smith notes the strange coincidence that Ms. Frankenthaler and sculptor John Chamberlain (who died on Dec. 21) passed away within days of each other, “considering that they occupy such similar positions within the history of American art.” Ms. Smith adds, “Both brought a new, unfettered approach to materials that pushed their respective mediums toward greater expressive freedom, unabashed physicality and a rough-edged, aggressively color-based beauty.” She also emphasizes the startling fact that, when Kenneth Noland and Morris Louis paid a supposedly pivotal visit to Frankenthaler’s studio in 1953, the artist was not there: her lover at the time, critic Clement Greenberg, brought them in. [NYT]

Update, 1:20 p.m.: Jeff Weinstein points us to a Los Angeles Times obituary that notes Ms. Frankenthaler felt that grants from the National Endowment for the Arts to Robert Mapplethorpe and Andres Serrano in the 1980s showed that the organization was supporting work of “of increasingly dubious quality.”

Also, make of this what you will, but, at the time we went to press with this post, Google News’ page for Helen Frankenthaler’s death had 196 results, while John Chamberlain’s had 126.

In other news, Martin Gayford previews the trinity of major British artists—Hockney, Freud and Hirst—with retrospectives coming up in London in 2012, the year that the capital will host the Olympics. [Bloomberg]

The contemporary art auction market grew by 35 percent over last year, according to Scott Reyburn, with the major auction houses bringing in a total of $1.7 billion at the year’s 12 major evening sales. [Bloomberg]