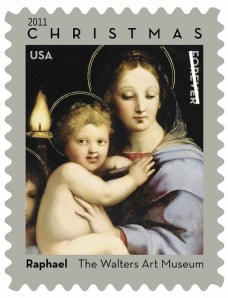 Raphael's "The Madonna of the Candelabra" as a stamp. (USPS)

British Petroleum, perhaps working to cleanse its reputation with a bit of culture philanthropy, will give £10 million ($15.5 million) to the British Museum, Tate Britain, the National Portrait Gallery and the Royal Opera House in a five-year deal. [The Art Newspaper]

Times co-chief art critic Holland Cotter’s files his year-end piece, arguing that New York museums had a banner year, while contemporary art galleries played it safe and moved product. Mr. Cotter writes: “You had really, truly, desperately need to believe in the perpetual wondrous newness value of contemporary work to conclude that the New York gallery season just past was anything more than a long flat line, with month after month of young artists rehashing yesteryear’s trends and veterans cannibalizing their own careers.” [NYT]

Diane Arbus gets her first major exhibition in Paris, and critic Jorg von Uthmann is not impressed by the installation. “[The organizers] present the 200 or so photographs in a muddle, leaving it to the visitor to decipher the sense,” Mr. von Uthmann writes. [Bloomberg]

Kristin Jones plans a tree-based project for New York, her first public artwork here since Metronome—that unpleasant smoke-spewing sculpture visible in Union Square, whose final form, Ms. Jones says, did not incorporate some of the elements that she wanted, like night lighting and a steam geyser. [NYT]

Ai Weiwei, on why he refuses to remain silent: “I have a chance to talk to you. Millions of people in their lives can never even clearly state their life and emotions and will die in this darkness.” [Guardian/Observer]

In case you missed it: Knoedler employees testify about what they did or did not know about the authenticity of a Jackson Pollock alleged to be fake. [NYT]

The United States Postal Service’s official Christmas stamp features Raphael’s Madonna of the Candelabra, which is in the collection of Baltimore’s Walters Art Museum. [Washington Post]