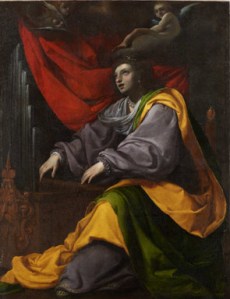 The Guardian takes a look at an unattributed, 17th-century painting of St. Cecilia at the Dulwich Picture Gallery in London. The gallery’s chief curator suspects a lady artist may be responsible. “I’m sure it will happen one day, I’ll find out who painted it,” he says. “It will probably come from being in Italy, having a good lunch and stumbling in to a church and seeing an altarpiece by the same hand.” [Guardian]

Perhaps inspired by Jay-Z’s “Occupy All Streets” campaign, a street artist named BLANK has proposed a project “to occupy each street in the country with a piece of art.” (His art, for the record.) [MarketWatch]