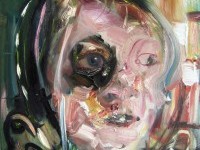 The figurative painter Natalie Frank will join Fredericks & Freiser gallery, with a first show planned for the fall of next year.

“I’m excited to be working with a gallery that I respect tremendously, both personally and professionally, and that represents so many compelling artists,” Ms. Frank wrote in an email.

Ms. Frank is a Fulbright scholar who showed with Mitchell-Innes & Nash from 2007 to 2010. Willem de Kooning and Neo Rauch would be among her more contemporary influences, but her work plays with formal ideas much older than those artists. Reviewing a show in 2008, Art in America said: “Using an established visual language to capture elusive identities in contemporary society, Frank has developed a distinctive strain of eccentric traditionalism.” Mazel!