Are you surprised that New Yorker publications love liberal TV? Not really? That’s okay, it’s still interesting to read up on the Experian-Simmons survey that measured consumer’s TV preferences against their political ideology and then spat out a bunch of shows that determine how liberal or conservative you are. Surprisingly (not surprisingly), most New York media favor the programs only watched by people who voted for Obama and support green initiatives.

For example: Liberals love “sarcastic” comedies like 30 Rock, Parks and Recreation, The Office (so basically all those flailing in Thursday night ratings), along with The Colbert Report, The Daily Show, and It’s Always Sunny in Philadelphia. (But also: Cougar Town? Raising Hope?)  Those left-leaners were also more likely to be fans of Treme, spend the mornings watching The View and late-night watching Letterman, Conan, or Craig Ferguson.

If you want to see what Conservatives watch (hint: You might be a Republican if you like Leno or Mythbusters), you can check out the incomplete list here.

But more importantly! Comparing this list against two years of New York Magazine’s TV picks — Emily Nussbaum‘s “Year In TV” last December and Vulture’s “Top 10 TV shows of 2011,” you’ll find 9 instances of overlap (with Community and Parks and Recreations counted twice for each year) with liberal favorites. Only one show –ABC’s The Middle–landed as an outlier, as the survey said that it was a favorite of both liberals and conservatives. Time magazine’s roundup of best shows in past two years had 3 liberal TiVo’d shows and 0 conservatives.

The Daily Beast had three lib-favorites  in 2010 (their 2011 “Top TV” list isn’t up), though they lose Progressive Points for putting Glee in their “Worst” list. The New York Times‘ 2010 list only had one show on their list that fit the criteria of liberal bias: Treme…but another zero for conservative favorites.

So what does this prove? Mostly that New Yorkers are nonpartisan: the survey didn’t even list Breaking Bad, Boardwalk Empire, Dexter, Friday Night Lights, or The Good Wife in either Conservative or Liberal fan favorites, but they consistently  showed up on every single list we looked at. (So did Parks & Recreation and Community, which were on the lib’s list.) When it comes to TV politics, it seems, NYC media is just too cool for either party. 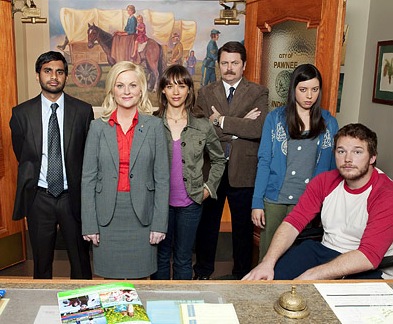