OVER THE WEEKEND, the New York Times‘ ‘Sports of the Times’ columnist George Vecsey surprised regular readers with his Saturday column this week, which he used to announce a change in his schedule: “it is time to step back (not using the R-word) and write for the paper occasionally.”

Mr. Vecsey was one of several Times veterans who signed off on the latest round of buyout packages recently offered to the paper’s staffers, many of whom were publicly mourned on Twitter by Times staffers (“Some really good people leaving @nytimes with the latest round of voluntary buyouts. Paper will be less w/o them,” one wrote).

The Observer was recently passed on a series of communiques from the Times in-house blog detailing who took the buyouts. In addition to Mr. Vecsey, a 30-year veteran of the paper, they are:

The departures were mourned and the staffers commemorated over the last week, through a series of tributes circulated at the Times internally. They are sweet, and touching, and in some cases—especially in the case of those written by the retirees themselves, like Nicholas Wade discussing his time writing scientific editorials—particularly insightful both in regards to culture and day-to-day work at the Times, from the perspective of its departing veterans.

We’ve posted the communiques in full below, and broken them up into pages to make them easier to read (they can get wordy, of course).

A few years ago, a respected copy editor who had just read Clyde Haberman’s NYC column told him: “If everyone wrote as cleanly as you do, I’d be out of a job.’’

Being able to produce consistently clean copy is just one of the many fine qualities that Clyde, who began working at The Times as a night copy boy in 1964 when he was a student at City College, has graced us with. Clyde, who has worked continuously at the newspaper since 1977 — covering everything from Jerusalem to City Hall — is taking the buyout. (Don’t worry, he’ll still be writing for us. More on that in a bit.)

Most of us associate Clyde with his insightful NYC column, which ran for more than 15 years and offered wonderful seen-it-all takes on New York, its government and interesting characters. But Clyde, whose cordial manner, dependability, clever wordplay and perspective make him a quintessential Timesman, has had the full Times experience.

The year after he started here as a copy boy, Clyde became the newspaper’s City College stringer at a time when the campus was rife with stories about civil rights and Vietnam. A youthful prank ended that stint in 1966 (see “The Kingdom and the Power” by Gay Talese for details on that well-worn story).

Clyde joined The New York Post, where he flourished as a reporter, covering high-profile stories like the Attica prison uprising and Jimmy Carter’s 1976 campaign for president.

In 1977, Clyde returned to The Times, working as an editor in the Week in Review before joining the Metro desk in 1978. He wrote a people column, worked as a general assignment reporter and covered City Hall, eventually as bureau chief.

Like Clyde, former Metro Editor Joyce Purnick came to The Times from The Post. “He was, in effect, my unofficial tutor’’ in making the transition to writing hard-news stories for The Times, said Joyce, who worked at City Hall with Clyde. (The Post, then an afternoon paper, favored second-day ledes.) “Clyde was — and is — a brilliant writer and an extraordinarily clear writer,’’ Joyce said. “He knows how to get to the heart of the matter.’’

After a stint writing a column of city vignettes, Clyde began a 13-year tour as a foreign correspondent, which took him to Tokyo, Rome and Jerusalem.

Clyde returned to Metro in 1995 to write the NYC column.

To plagiarize from something I wrote a few years ago about NYC:

“Clyde’s column routinely showcases his rich perspective and urbane wit. Whether he’s weighing in on the rich array of crimes that our politicians have committed of late, the always-dreaded weekend subway schedule, or police-involved killings, he invariably brings valuable insight, street-level reporting and nimble writing to the table. He’s the worldly New Yorker who helps us make sense of all the weirdness going on about us.’’

It is also telling that along the way, Clyde was called upon for some special assignments, including writing a daily synopsis of 9/11-related articles for A Nation Challenged sections and providing the introduction for a Times book about the 20th century in Times Square.

Since May, Clyde has written a four-day-a-week online column called The Day for Metro’s City Room blog. The good news is that even after he leaves The Times, he’ll continue to write that column three days a week on a freelance basis. Look for it on Mondays, Tuesdays and Thursdays.

Carolyn Ryan invites everyone to please join Metro in toasting Clyde on Monday, Dec. 19, at 4:45 p.m.

It’s safe to say that Andrea Stevens is not the kind of person who craves attention. Actually, she loathes it. Which is why it is only today, on the last of more than 9,000 days she has worked at The New York Times, that she is willing to let everyone know she is taking the buyout and leaving. No cake. No bubbles. Read more in this note from Jon Landman.

How do you measure how much she’ll be missed? What’s the value of unparalleled experience, knowledge, taste and judgment? Of humanity, humor and dignity? The question answers itself. 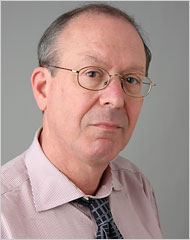