Last night, demonstrators who arrived in midtown to protest a Barack Obama fundraiser found themselves corralled into a “free speech zone” on 53rd Street and 7th Avenue. Reporters–like Josh Harkinson from Mother Jones and Meg Robertson from MSNBC –were not allowed near the penned-in demonstrators, despite Commissioner Ray Kelly‘s recent orders that the NYPD was to play nice with journalists covering OWS. This directive came after the events of the November 14th raid of Zuccotti and the Day of Protest on the 17th left 26 reporters arrested.

Gothamist reports that journos trying to get near the pen were told by police officers that the demonstrators were in a “frozen zone,” and not able to leave. Journalists were barred from speaking to them.

A video of Mr. Harkinson and Andrew Katz, a reporter for The Brooklyn Ink after trying to question protesters who say they were being held captive, was put online on Mother Jones’ website. The video also shows the police leading them away from the pen, being told “You can’t stand in this area.”:

It is unclear whether Mr. Harkinson or Mr. Katz had NYPD-issued press badges, or any sort of marker indicating them as members of the press instead of civilians. Not that would have made a difference. 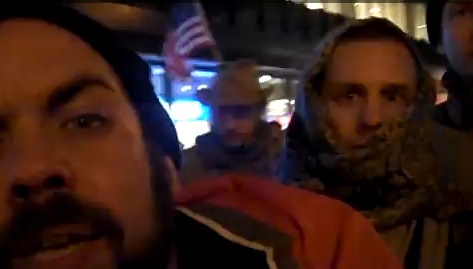