Remember the days when The New York Times‘ Chief Wine Critic Eric Asimov tried to pretend that everyone in New York wasn’t as wealthy as it’s 1%? Emphasis on the word tried: Even his old “$25 and Under” column usually found ways to give rave review upscale joints like Barbuto and Shore in Tribecca by listing a dish or two that happened to be under the quarter-hundo range.

But “$25 and Under” fell by the wayside over half a decade ago, and in that time Mr. Asimov has let the pretenses fall away. He is not at The New York Times to sell you on food carts or hot dog joints off of Montrose Ave. Go read GQ if you want that crap. And in his latest column reviewing Graydon Carter‘s Monkey Bar (Why? What? Again? Have we run out of restaurants?) Mr. Asimov uses the opportunity for a scathing takedown of an entire borough. That’s right, Brooklyn. Ya burnt.

This is just the opening line of “Welcome to the Club”:

NOT everybody yearns for Brooklyn, or even for what Brooklyn has come to represent among New York restaurants.

Fair enough! People do treat Brooklyn like its the culinary cutting edge of the world, and we ourselves sometimes get sick of hearing about how happy our organic free-range chicken was before we eat it. But then Mr. Asimov gets personal in his attacks:

The guys in beards and knit hats have their place, as do the tattooed servers, the avant-garde wines and turn-of-the-last-century cocktailians, and all the rest.

I love all that, of course. But occasionally I have guests with more uptown tastes. They prefer not to be physically challenged by seating arrangements that would daunt even spelunkers. They would rather not strain to hear over the pounding beat of a bartender’s iPod, or squint to decipher a graphically perplexing menu in the barest glow of candlelight. They do not go to restaurants to be challenged by chefs intent on transgression.

We’d like to know what “occasional guests” Mr. Asimov has over that he projects such a hatred of the L line on to. He himself obviously loves the  tattooed cocktailians with their knit hats and old-timey mustaches and “avant-garde” (read: weird) wine lists. But Mr. Asimov has to make do with the fact that all his friends, when visiting from out of town, expect nothing but the best from their fancy food critic acquaintance. They don’t want to be “challenged” by food, they don’t want “perplexing menus” or have to eat by candlelight. (Mr. Asimov’s friends sound like they just want to go to Applebee’s.)

So instead…Monkey Bar. Where executive chef Damon Wise has overhauled the menu to what Mr. Asimov describes as “straightforward even though some of its complexities can seem puzzling and fussy.” What? That sentence is puzzling and fussy: is the menu straightforward or confusing? Wasn’t he just complaining about “perplexing” menus? And why on Earth are we still talking about Monkey Bar?

We have no problem admitting that there is better food out there than some of the over-hyped Brooklyn eateries. But Monkey Bar? As a revelation of cuisine? That topic is as cooked as the Brooklyn culinary scene; for our part, we’d rather read another piece on the genius of David Chang. 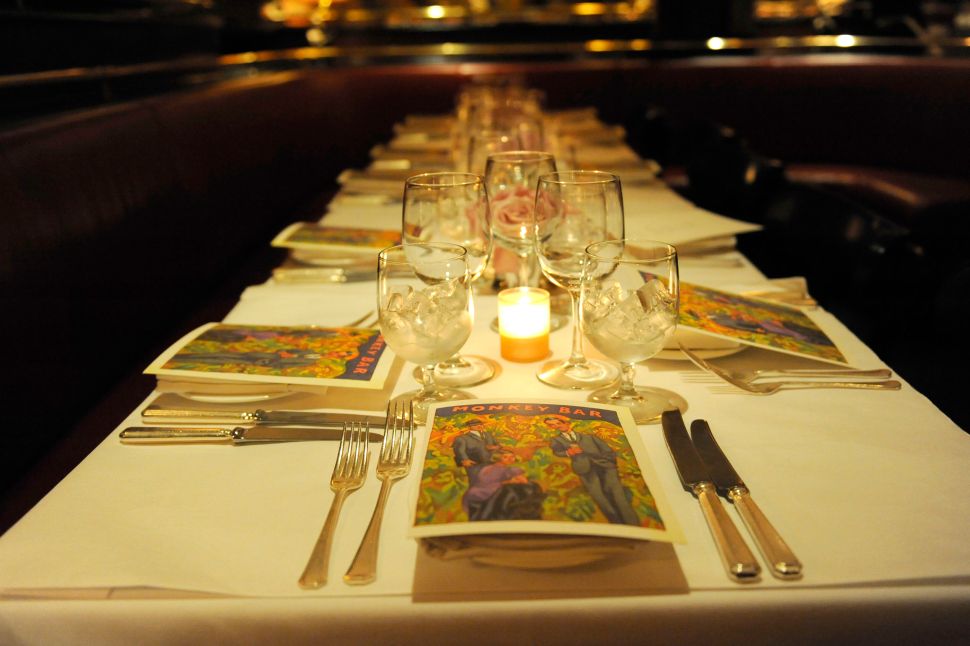