Two weeks ago, three Occupy Wall Street members began a hunger strike in front of Duarte Square. They were protesting Trinity Wall Street Episcopal Church for not allowing them to use the empty lot owned by the church’s real estate arm, Hudson Square Properties. The demonstrators were arrested…twice…for trespassing on the church’s land.

It seemed like an odd battle to pick for Occupy Wall Street; especially since Trinity Church had provided the OWS with space to hold meetings, use WiFi and public facilities, and even join in discussions with religious leaders. But since Nov. 17th’s Day of Action saw members get arrested for trying to make a temporary camp in the empty lot, the Occupiers have focused their energy on guilting the church into just giving them the land.

Except, as we noted at the time, this was never going to happen. Trinity Church owns a substantial chunk of New York real estate, bequeathed to them by the Queen Ann of England in 1705.  The money goes back a long way, and now so do the vestry. So when the OWS posted a blog “Trinity Wall Street Vestry’s 1% Connections,” noting all the big-name real estate developers and very rich people associated with the church, the feeling is sort of like…well, yes, of course this is the case. Obviously.

An analysis of Trinity’s vestry (the governing board that manages the parish’s affairs) lends some significant weight to these concerns. Marked as up-to-date as of May 6, 2011, the vestry list reads as a who’s-who of the rich and powerful in New York, including Wall Street bankers, media and real estate executives, and in the most telling case, a former executive vice president of Brookfield Properties, the company that owns Zuccotti Park and pressured the city to evict the occupiers in the first place. (See the full list below).

This isn’t exactly new information. And again, turning Trinity into the bad enemy is not in the Occupiers’ best interests. The church–1% alliances and all–were letting OWS use its Charlotte’s Place area as a place to regroup and use the Internet and bathroom. No matter who “owns” Duarte Square (and it is most certainly Trinity), OWS has no right to demand the space and condemn the people who own just because they aren’t getting what they want. It makes those members of the movement look spoiled, ungrateful, and worse: naive. We find ourselves agreeing with what Trinity’s Rector Dr. James H. Cooper, who recently wrote about the situation:

Calling this an issue of “political sanctuary” is manipulative and blind to reality. Equating the desire to seize this property with uprisings against tyranny is misguided, at best. Hyperbolic distortion drives up petition signatures, but doesn’t make it right. Those arrested were not seeking sanctuary; they were seeking to be arrested. Trinity will continue our responsible outreach and pastoral services for all. We appreciate the many expressions of support we have received from so many in the community. 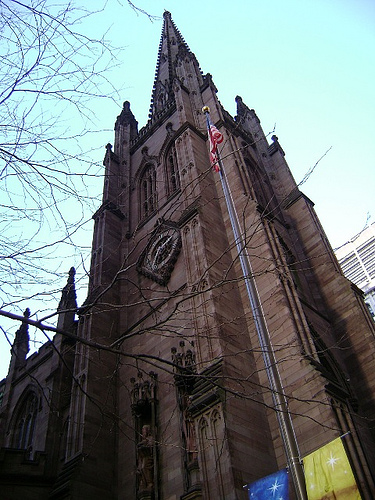