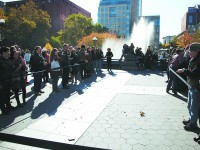 It is rare that art and politics collide in as dramatic a fashion as they did for the Tel Aviv-based artist Dana Yahalomi. In her case, it was art and Occupy Wall Street. Ms. Yahalomi, 29, was in New York in October and November to present a work for the Performa performance art biennial called Positions that was created by Public Movement, an art collective that she leads. She immediately began visiting the Occupy Wall Street protests at Zuccotti Park.

“It was so strange, because we had just failed in Israel,” she told The Observer by Skype on Sunday from Tel Aviv, referring to protests in that city. “The tents were evacuated and life got back on the normal track. I came to New York and it was starting again. It was like traveling in time.”

The New Museum recently announced that Public Movement will be among the 34 artists and collectives participating in its second triennial, which has been titled “The Ungovernables,” and, before Ms. Yahalomi’s arrival, its staff had helped secure permits for the group to perform Positions for four hours at Washington Square Park and Union Square, on two separate days.

“We petitioned for the permits before the Occupy Wall Street movement popped up,” Travis Chamberlain, the public programs coordinator at the New Museum, said last week in a fifth-floor conference room at the institution’s Bowery home. “Occupy Wall Street created a fortuitous moment for the piece.”

Ms. Yahalomi began research in New York back in February, when she was in town on a month-long residency that was organized by the New Museum and Artis—Contemporary Israeli Artist Fund. To stage the action she settled on, she told us, “I only needed half an hour.”

That gave her an extra three and a half hours worth of legal public assembly, and she realized that she could give that time to Occupy Wall Street. Her rationale, she said, was, “I have something that I can get through culture that you cannot get through politics. Let’s make politics out of culture.”

The triennial doesn’t open at the New Museum until Feb. 15, but it has actually already started. “It began with the residencies,” Eungie Joo, the exhibition’s curator, who was sitting next to Mr. Chamberlain, 34, told us. “They are part of the triennial. They are not just the research part.”

Ms. Joo, who is 42 years old and director and curator of education and public programs at the museum, has spent the past two years preparing for the exhibition, visiting hundreds of artists in more than 20 countries.

“I started working without a preconceived notion of what the triennial’s joining principles might be,” she explained, when asked how she began organizing the exhibition. Ms. Joo, who was wearing wide silver earrings and a long suit jacket, speaks in a bracing, staccato style, and tends to gesticulate intensely to make her points.

How, we wondered, did she determine where to go to look for the most interesting artists of a generation that, as she defines it, started in the mid-1970s and includes people born as early as 1974? “Many places became central to our research because colleagues told us, ‘Really important things are happening here,’” she said, citing Johannesburg, Buenos Aires, Bogota, Mexico City, Hong Kong, Mumbai, Beirut and Cairo as examples.

The resulting show, the New Museum’s second triennial, is one of the more ambitious exhibitions that the city has seen in recent memory. Only seven of its 34 artists and groups work in the United States, and the range of their practices is vast—some sit on the outer reaches of what most would consider art, and many have been seen only rarely in the U.S. There is a printed directory in the works that will catalogue more than 400 independent art institutions in 96 countries, a veritable atlas to today’s international art network.

Residencies have been staged over the past year not only with Public Movements but also with the Mumbai-based collective CAMP, which created a radio station devoted to dhow shipmen for the 2009 Sharjah Biennial, and Argentine artist Adrián Villar Rojas, who installed a life-size reproduction of a whale in a forest in Ushuaia, Argentina, in 2009.

And then there is Los Angeles-based trans artist Wu Tsang, who was in residence this summer, and who also performed under the aegis of Performa, staging a dance party in the Sky Room of the New Museum. Mr. Tsang’s friend, a DJ who goes by the name of Total Freedom, played crisp, pop-infused house music. People drank and danced, as rumors rippled through the crowd about what was going to happen.

“Performance art events in museums are not always the most inviting spaces for people that are not part of them already,” Mr. Tsang, 29, told us by phone from Los Angeles last week. “Parties are an in-between space, where people can access it.”

After about 90 minutes, the lights cut out and the audience saw a group of performers on the floor, their bodies intertwined. They acted out short snippets from the controversial 1990 drag queen documentary Paris Is Burning, another from the 1960s called The Queen and interviews with members of the communities featured in those films. The action lasted only about 10 minutes, but it was one of the Performa biennial’s most captivating moments.

Preparing for the performance, Mr. Tsang worked with Mr. Chamberlain and Ms. Joo to develop a series of related programs that involved people like filmmaker Charles Atlas, artist and Latex Ball organizer Ivan Monforte and Jonathan Oppenheim, the editor of Paris Is Burning to discuss aspects of the film, whose portrayal of its subjects has been the subject of debate for years

Mr. Tsang is now in the midst of completing a feature film of his own, Wildness, which shares the name of a series of parties he once organized with friends in Los Angeles. He also creates performances and installations and video, and Ms. Joo had been watching his work for a number of years.

“There’s no rocket science here,” Ms. Joo said, when we proposed that she was up to something unprecedentedly ambitious. She pointed to curators like Hans Ulrich Obrist and Okwui Enwezor, who have staged similarly open-ended, multipart and uniquely designed exhibitions. “This is the structure in which the artists we’re working with already work,” she said.

“There is an audience for this, and there is a group of artists who need us,” Ms. Joo continued, tapping the table as she made each point. “They need us to provide this space to rehearse in, to perform in. It is our responsibility.”

Until 2006, Ms. Joo noted, when the New Museum moved into its current home on the Bowery, it did not even have a theater–the space that Mr. Tsang used to develop and rehearse his piece. Now it is hosting a triennial that would seem to put it in dialogue with some of the art world’s most important international exhibitions.