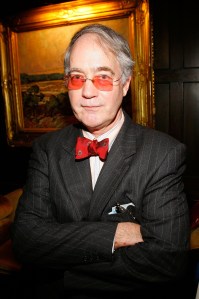 The New York Times today recaps the ongoing saga of O. Aldon James and the National Arts Club, stringing together the juiciest moments of Mr. James’ ouster and the club’s efforts to formally evict him from its physical plant.

There’s not much new in the story, but what is new is good. DNAinfo had previously reported on a September club meeting in which Mr. James made an unpleasant reference to cancer, but according to The Times Mr. James essentially ran roughshod over the whole thing.

“During the gathering, Mr. Riopelle said, Mr. James told the new president, Dianne Bernhard, a cancer survivor, that he hoped the disease would return. Mr. James also turned to Mr. Riopelle, according to the lawyer, to say that any of one female board member’s three dead husbands would ‘thrash’ Mr. Riopelle if they were still alive.

“At one point, Mr. Riopelle said, the club’s secretary burst into tears ‘because the meeting had become so chaotic she was unable to follow the proceedings and take accurate notes.'”

Sounds chaotic! A judge recently ruled that the eviction process may continue, which means we may be hearing more stories like this in the future.