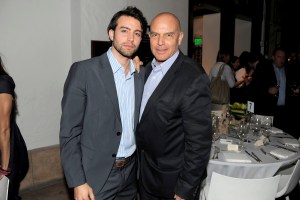 Tomorrow, the Museum of Fine Arts, Houston, is putting on display selections from the 1,500-item edition archive of SoHo and Chelsea gallerist Peter Blum, who has been active as a print publisher for more than 30 years. The exhibition comes exactly 40 years after Mr. Blum began his art-dealing career at the storied Galerie Beyeler in Basel, Switzerland.

Among the works on view from the archive, which MFA, Houston, acquired in 1996, are figurative prints by New York painter Eric Fischl, color woodblock prints from 1986 by Alex Katz and intaglio sheets by Minimalist Brice Marden. The show also includes a new work by Huma Bhabha, who currently shows with Mr. Blum’s gallery.

In a news release, the museum declares that Mr. Blum “is considered to have the best eye of his generation.” High praise indeed. Gallerist wishes that we were going to Houston sometime soon. If only a New York museum had snagged the acquisition!