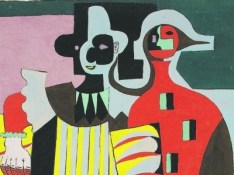 Like one of his Cubist creations, Picasso would seem to have as many faces as his curators require. Despite several Picasso solo shows this year (the intellectual collage artist at MoMA, the adulterous powerhouse painter at Gagosian Gallery), the Frick has, in the early drawings, discovered yet another facet to the 20th century’s favorite artist: precocious turn-of-the-twentieth-century draftsman. Looking at Picasso through the lens of drawing, and positioning him in relation to his engagement with artists of the past during the first three decades of his career, is a clever trick for the Frick, a museum of old masters; the result is a portrait of youthful ability and intense ambition.

The show features some 60 early Picasso drawings borrowed from the Museu Picasso, the Picasso estate, the National Gallery of Art, and a number of other museums and private collections. From the artist’s first signed drawing—executed at age 9, and alarmingly adept—to the pieces he made as a young father and famous painter, these works on Ingres paper and cardboard, scraps of notebook and collage, bring you into the artist’s early career through the particularly intimate medium of drawing. Picasso thought through line, and line is also where his ambitions, imitations and desires are revealed most clearly.

Picasso was a child prodigy. If you’ve been to the Museu Picasso in Barcelona, you already know the precocious work of this young man whose father, José Ruiz Blasco, was a drawing instructor at the local art academy. Picasso grew up with the apparatus of the academy at hand: plaster molds and young men in dusty suits seated in front of drawing easels. Hercules (1890) is a light but competent sketch of a Renaissance sculpture—nothing special, except when you consider that he made it at age 9. Bullfight and Six Studies of Doves (1892), done when he was 11, shows some humor and verve developing in his work.

Picasso first hits Paris in 1900, when his painting was shown in the Spanish pavilion of the Exposition Universelle. In a self-portrait made in late 1901-02, you see that the teenager has taken in Gustave Courbet’s romantic self-portraits. The black chalk scribble frames his intense glare; the pale, handsome face hovers above an overcoat and cravat. The shock of brilliant black hair is a surprise—we know these eyes and the shape of this head mainly from images of a mid-20th-century bald man; to see this same figure in the costume of a 19th-century Romantic is enjoyably incongruous.

Other drawings speak to the experience of collegiality. By 1907 he was working on Les Demoiselles d’Avignon and famously “borrowed” two ancient Iberian heads from the Louvre with his friend the artist Guillaume Apollinaire; these were later returned to the museum. Yellow Nude (Study for Les Demoiselles d’Avignon) (1907) came out of that prank, but this bold yellow woman standing with arms akimbo and a masklike head is equally indebted to the Primitivist fantasies of Paul Gauguin.

Post Demoiselles, the Cubist Picasso begins in earnest. His Nudes in a Forest, from early 1908, is a confident take on Cézanne’s Bathers. He tracks Cézanne (who died in 1906) through a series of still-life studies in blue and brown gouache (Still Life With Chocolate Pot, 1909) and arrives at some startling papier collé and charcoal pieces, like The Cup of Coffee (1913), a collage of wallpaper, white chalk, charcoal and other cutout materials in which the letter E becomes a lute, then a cup of coffee. The piece speaks to the transformative properties of materials and language, but does so lightly, playfully.

Historically, we tend to know two Picassos, one all slashed thick lines, curves and volumes, and the other idealizing, delicate and seen as classical by his contemporaries. The Frick show makes a case for yet another, lesser-known Picasso, one whose photographic realism came from drawings from photographs, as in the Portrait of Madame Georges Wildenstein (1918). Here Picasso is looking at Ingres—his crisp, refined lines, and pencil-on-paper’s paper-thin perfection.