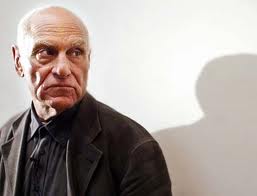 The Museum of Islamic Art has a new 62-acre park on the waterfront of Doha, Qatar. Tonight, the park will make its debut in the company of Qatari emir Sheikh Hamad Bin Khalifa Al-Thani, Qatar Museums Authority chairperson Sheikha Al Mayassa bint Hamad bin Khalifa Al-Thani and Richard Serra, whose lack of an impressive title makes that list feel kind of anticlimactic.

Mr. Serra has made a new work, titled 7, which is 80-feet tall, eight-feet wide and four inches thick, and is the artist’s tallest sculpture to date (and also his first public work in the Middle East). Of the work, Mr. Serra explained in a statement:

“I titled the sculpture 7; just the numeral, not the word. The sculpture is made of seven plates of steel, which form a seven-sided shape on the ground with three triangular openings and a seven-sided aperture at the top. The title, 7, simply reiterates the construction and plan of the sculpture.”

Incidentally, Mr. Serra picked a number with a lot of significance.

“It is my understanding,” he said, “that there are many references in the Qur’an to the number 7. The number 7 is also central to an important discovery by the great 10th-century Persian mathematician and astronomer Abu Sahl al-Quhi. Archimedes had introduced the concept of a regular heptagon into geometry but it had remained unexplored for centuries. It was Abu Sahl who proved that a regular heptagon could be constructed into a form.”

Sheikha Al Mayassa bint Hamad bin Khalifa Al-Thani said the park is meant to be a place where people can “meet and relax.”