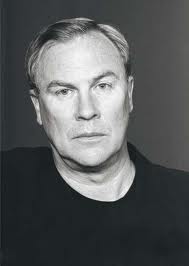 Since the play has such a small performance history, the details about it are obscure. According to the Los Angeles Times, which mined its own archives to find some info:

“The title of Wilson’s piece is also the opening line. Wilson soloed in the first half, followed by Childs, who spoke many of the same words. The last line of each segment was ‘A lot of nerve.’

“Also involved, according to The Times’ 1977 account, were a wine glass, a telephone, projections and a recording of a Sousa march.  There was also a yell from the back of the hall, ‘TCA 837, your lights are on,’ but our reviewer, Dan Sullivan, didn’t say whether that was a heckler or a plant. Sullivan’s summation: ‘We leave, not enraged, not enraptured. A voice is heard in the mind. Andy Warhol’s, when asked what he thought of the 1970s: “I like them because they’re so empty.”‘”

According to organizers of  PST’s performance festival, Mr. Wilson and Ms. Childs’ production “cannot be fully realized without the additional time and attention to detail this seminal performance requires.”