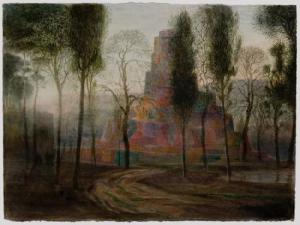 London’s Royal Academy of Art picked artist Christopher Le Brun to become the 26th president in its 243-year history. The Guardian notes that Mr. Le Brun is the first painter to lead the institution in two decades, and won after four rounds of voting by the 84 academicians.

“I think the academy is very well placed to show major exhibitions of, say, painting or sculpture, which establish a new movement or put us in touch with what’s going on,” Mr. Le Brun told the paper. Could there be another “Sensation”-style controversy in the future?

Mr. Le Brun, for his part, was rather pleased to have a painter at the helm of the group. “Dearly as I love the architects, who are tremendously efficient at this sort of thing,” he said, “some painters can also do the job.”