Last night during The New York Observer‘s foray into the studios of Andy Cohen‘s Watch What Happens Live we actually learned something. (Incredible, when dealing with a reality television roundups.) During the after-hours show,  Mr. Cohen asked actress/comedian Sandra Bernhard (via a reader’s query)  if the rumors were true that she was in competition to play Samantha in Sex And the City.

“It wasn’t Samantha. It was the other one,” Ms. Bernhard said.

“Miranda?” Mr. Cohen asked.
“The pilot script was disaster” Ms. Bernhardt said. “They offered the worst money in the entire world. I had just gotten off of Roseanne and I was making about four times what they were offering for Sex and the City. I’m so glad I wasn’t the girl picking cake out of the garbage can…you know how Miranda was always eating cake out of the garbage? And crying because she didn’t have a man?”
“Do you have any regrets? I’m sure the money ended up getting bumped up,” Mr. Cohen argued.
“Not until the movies,” Mr. Bernhard said, “No one except Sarah Jessica Parker, who made all the money on that show, and made herself executive producer. The rest of those girls sat by and freaked out about it.”

Mr. Cohen then went on to confirm the dates Ms. Bernhard would be performing at the club Axis in Columbus, Ohio.

“Maybe I should have done Sex and the City,” Ms. Bernhard laughed, dryly. (Clip starts at 2:50 mark) 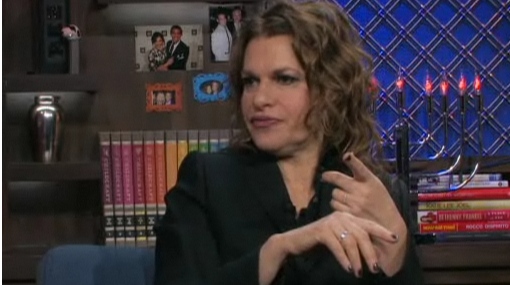