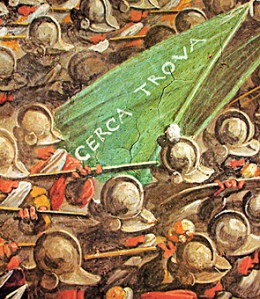 The hunt for Leonardo da Vinci’s Battle of Anghiari is becoming more fraught, with certain scholars comparing the search for the lost work to The Da Vinci Code. The search goes back more than 35 years.

In 1975, Maurizio Seracini noticed the words “Cerca Trova,” which translates roughly to “Seek and Ye Shall Find” on a fresco in Florence by Giorgio Vasari called The Battle of Marciano. He took the phrase literally and began looking for a space in the wall behind the fresco where he believes the lost Leonardo is hidden. The search has intensified recently: Mr. Seracini has the support of the Florence mayor. His recent decision to drill holes into the Vasari in November in order to probe the gap behind it prompted a petition against the quest. It was signed by 300 scholars.

Bloomberg has a nice summation of why it’s probably not worth destroying or defacing the Vasari for the sake of what is still only a hypothetical Da Vinci:

“There are two points at issue. One is whether Leonardo’s Battle might really be there. The answer seems to be, probably not but just possibly, it might be. Many scholars believe that Leonardo’s picture was on a different wall. The jury is still out on that dispute.

“A final consideration is whether there would be anything left worth looking at. Leonardo used an experimental technique, as he did on the ‘The Last Supper,’ with similarly disappointing results (which would seem to be why he left the work unfinished). The ‘Battle of Anghiari’ already was peeling in the early 16th century, according to Vasari himself.

“If after all these considerations a significant section does survive, it would be sensational. Yet that would raise the most difficult question of all: How to get it out from behind that wall?”

We may not know what lies behind the Vasari (if anything), but at least we learned how Renaissance scholars insult one another: “To make a comparison The Da Vinci Code, the article says, “is the rudest remark in the insult dictionary of a Renaissance art historian.”