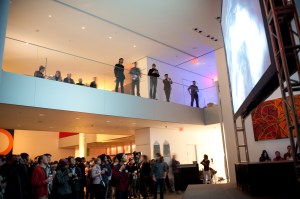 A wave of flannel descended upon the Museum of Modern Art on Saturday for a performance by the experimental D.J. Oneohtrix Point Never, a.k.a Daniel Lopatin, whose latest album received an 8.8 from Pitchfork and all the instant (if deserved!) admiration that entails.

Mr. Lopatin was paired with the visual artist Nate Boyce, and upon entrance visitors received programs that weren’t in fact programs but zines “edited by Oneohtrix Point Never,” featuring images like a photocopied Subway gift card, a pyramid and Charlton Heston clutching copies of Die Hards I and II as if they were the Ten Commandments.

In the atrium, everyone clustered around Balzac and sat on the steps sipping Brooklyn Brewery beer before a big screen, some fifteen feet by fifteen feet in the middle of the room. Double oblisque speakers hugged each corner.

It began with thuds shortly after Mr. Boyce and Mr. Lopatin took their seats on stage, and it soon became discordant, and thunderous. At one of the first screeches, a man in glasses standing behind his girlfriend shot his hands to her ears, to protect them.

The images on screen were rough CGI representations of statues from the MoMa collection, in frenetic backgrounds—think Max Headroom meets early Pixar lamp skits—the whole screen flickering ala Paul Sharits and difficult to watch for an extended period. Anthony Caro’s Midday (1960) was shown amid marble and snow, as a patrician, or maybe just slowed, British voice boomed over the speakers with audio guide-like information occasionally interrupted with D.J. sounds.

“Often the finished piece is then painted in a bold flat color,” the voice roared, about Caro, as Midday was disassembled and reassembled onscreen. “He is often credited with the significant innovation of removing the sculputre from its plinth — PEW PEW PEW PEW PEW”

A MoMA cameraman stood in the audience with a camcorder trained on the artists’ faces, their gaze hardly ever leaving the screen. At one point Mr. Lopatin shook his head no, no, no as if it was all too much, though Mr. Boyce disagreed nodding yes, yes, yes.