This weekend, several well-meaning (we hope) parents decided to show their kids what activism looked like as they combined the anti-bullying campaign that’s been sweeping the nation with an OWS rally against those mean “bully” policemen. The kids made signs and put paper hearts on the gates of City Hall. Guess what happened next?


In a video entitled: “NYPD and NYC City Hall Break Kids Hearts,” those “bullies” tore the paper hearts down! Hearts put up by children! Who came up with this idea all on their own and were in no way being used as pawns for some sort of viral emotional slander against the NYPD.

Sorry, when it comes to videos like these, we can’t help feeling a little manipulated. Sure, being bullied is terrible, and schools should be doing the most they can to prevent it. But bullies aren’t under orders from their supervisor to get rid of paper that a bunch of protesters have decided to hang on the gates of city hall.

And for those who are itching to comment: “You know who else were just following orders? The Nazis!!”

Don’t do that. It’s a stupid, illogical argument, and there are enough actual infringements on protesters’ and journalists’ constitutional rights that we don’t need to start making them up. 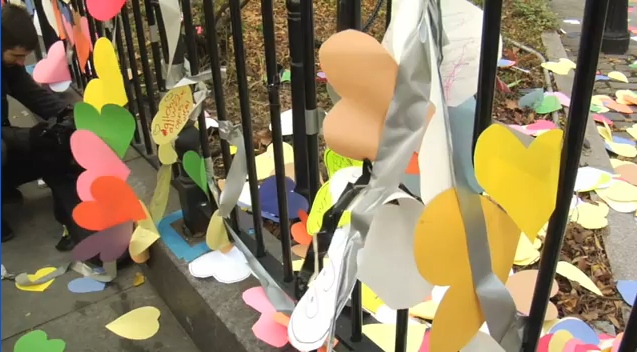