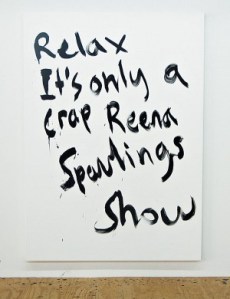 A work by Merlin Carpenter.

Looking over the list of artists participating in the 2012 Whitney Biennial, it appears to be–as Postmasters owner Magda Sawon quipped on Twitter moments ago–“mercifully short on big art market stars,” with Mike Kelley, who shows with Gagosian, perhaps the lone exception.

Rather, many of the artists show with downtown galleries that focus on emerging artists, or they are among the more low-key artists on their dealer’s roster (e.g. Kai Althoff at Gladstone, Vincent Facteau at Matthew Marks, etc.).

A handful of New York dealers have more than one artist in the biennial, including Greene Naftali, where biennial co-curator Jay Sanders previously served as director. Reena Spaulings is the prettiest girl at the dance, providing three artists for the exhibition. A list of dealers with more than one participant in the show is below: