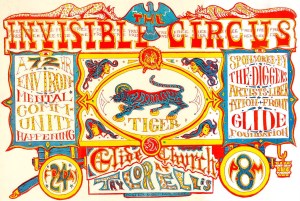 A poster for The Invisible Circus. (Jack Hanley Gallery)

A exhibition that opens at Jack Hanley in SoHo next Thursday, Jan. 6, documents a movement with no single, clear message that set up in an urban center and provided free food and medical care to all comers for a brief period. Its members talked frequently about a special one-percent of society. An opportunistic exhibition about the Occupy Wall Street movement? Thankfully, no.

The show in question is “Diggers, Mimes, Angels and Heads,” and it instead documents a group from about 45 years ago, The Diggers, a band of counter-culture types who organized in the Haight-Ashbury district of San Francisco in 1966, out of the San Francisco Mime Troupe, providing a variety of free services—and some tremendous Happenings—for the local community.

“I got interested in the Diggers from my first trips hitching to San Francisco in 1968 and their free medical clinic and food,” Mr. Hanley told us by e-mail. “I stayed in a commune there that was linked with them.” The dealer ran a gallery in the City by the Bay from 1990 to 2010, when he decided to devote himself full time on the western edge of downtown Manhattan.

“Diggers, Mimes, Angels and Heads” will include a trove of posters for, photographs of and ephemera from the group’s events, which often took the form of multi-day festivals. For instance, one event, The Invisible Circus, held from Feb. 24 through 26, reportedly featured a hallway filled with styrofoam and a panel discussion about pornography (that included the local vice squad). As the events progressed, the Diggers worked on Gestetner machine, a basic copying machine, providing updates to those in attendance—a sort of proto-Twitter.

Though the Diggers’ tactics were certainly political (they also operated, briefly, a Free Bank, giving away money that was raised by members and a Free Shop that gave away its contents), they eschewed any simple sloganeering. The gallery says in a release:

Mr. Hanley added that he “always had collected their posters and flyers and liked their whole attitude about absurdist life practices and free things, community.” Now certainly feels like the right moment to pull them out of storage, along with documents about The Hells Angels and the Heads, other groups that the gallerist knew from his time in the area.

And what of the 1 percent that the Diggers referred to? In a reversal of today’s rhetoric, the young absurdists considered themselves to be in that select group—the fractional percentage of society that was truly free.