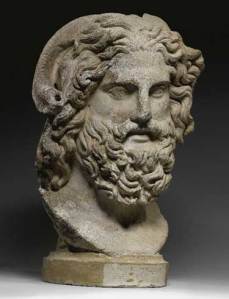 The head in question (Photo courtesy of Sotheby's)

Last night at Sotheby’s Egyptian Classical and Western Asiatic Antiquities auction, the Metropolitan Museum of Art purchased a Roman head that it had previously exhibited between 2007 and 2008. The head was listed in the catalogue as “Marble head of Zeus Ammon, Roman Imperial, c. 120-160 A.D.”

This amusing happenstance comes to us from the eagle-eyed Lee Rosenbaum, who wrote:

The Met’s imprimatur might help to account for its more than doubling the auction house’s $800,000-$1.2 million presale estimate of hammer price. It was knocked down to the Met for $3.1 million, for a final total of $3.56 million with buyer’s premium.

Completely unrelated to this, Ms. Rosenbaum points out that Sotheby’s misread another, online bid —  by a factor of ten — on another lot. They corrected that number today.