You didn’t think that The Paper of Record was going to take the mistreatment of one of their photographers at Monday’s Occupy Wall Street Protest at the World Financial Center Plaza sitting down, did you? Absolutely not:
Once The New York Times confirmed that their own freelance journalist Robert Stolarik was captured on video being pushed down the steps of the atrium by a member of the NYPD and then blocked by another officer with a baton for trying to take pictures of the ensuing arrests, the editors wrote a strongly-worded email to the NYPD. Because the first time they told Ray Kelly and Michael Bloomberg that the harassment of credentialed journos would not be taken lightly, it worked out so well?

While we don’t have an exact copy of the memo, NYT‘s VP and assistant general counsel George Freeman said:

“It seemed pretty clear from the video that the Times freelance photographer was being intentionally blocked by the police officer who was kind of bobbing and weaving to keep him from taking photographs,” said Freeman, who expressed concern Tuesday that the commissioner’s “message that was sent out, while aimed with good intentions, doesn’t seem to have had much effect on the ground.”

And while the NYPD’s department head has acknowledged relieving the note, there has been no response from Commissioner Kelly or one of his representatives. Because who needs to answer to journalists anymore? 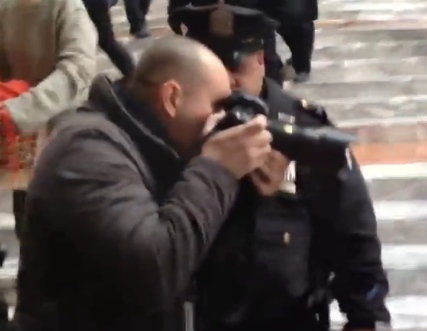