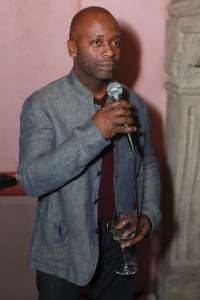 Chicago artist Theaster Gates’ rapid, recent ascent through the art world continued today, with news that he has signed with Jay Jopling’s White Cube gallery in London. The Baer Faxt broke the news, which a rep at White Cube confirmed to Gallerist by telephone. A solo show at the gallery with Mr. Gates has not yet been set. Mr. Gates is repped by Kavi Gupta Gallery in his hometown and in Berlin.

Mr. Gates is perhaps best known for work that obliquely addresses issues of politics and race–he, for example, made paintings out of decommissioned fire hoses, for “An Epitaph for Civil Rights,” his first one-person museum exhibition on the West Coast, which runs at the Museum of Contemporary Art Los Angeles through Jan. 16.

At an undergraduate at Iowa State University in the mid 1990s, Mr. Gates studied ceramics and urban planning, and many of his projects have involved transforming disused buildings on Chicago’s South Side into spaces that can be used as libraries, housing, kitchens and performance venues.

Well known in the Windy City among artists and curators, he began attracting wider notice after appearing in the 2010 Whitney Biennial with his performance group, the Black Monks of Mississippi. In August of this year, collector Dennis School confided to Bloomberg, “He’s on the list of every contemporary collector right now.”

In addition to his current MOCA L.A. show, Mr. Gates has had one-person shows at the Seattle Art Museum, the Milwaukee Art Museum, the Museum of Contemporary Art, Chicago, and the Pulitzer, in St. Louis, Mo. His work is on the cover of Art in America this month.

New Yorkers will have a chance to see some of Mr. Gates’s work in New York in March, since he has been named the official artist of the 2012 Armory Show.