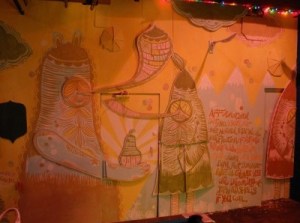 Thomas Campbell, the painter and filmmaker, was out buying paint when Gallerist showed up at the bar Max Fish for an interview. Mr. Campbell was at work on a mural in the back, by the pool table, and it was half finished. Silhouettes of two bulbous figures—they resemble ectoplasm with faces and have been appearing in his work a lot lately—were scrawled on the wall with rough brush strokes, waiting to be filled in with the small details. We spent a slow and quiet 20 minutes with Mr. Campbell’s two friends that help edit most of his films before heading around the corner to Half Gallery, where the artist’s exhibition “Capture and Release” is up until January 30.

“Give in, at all costs,” one of those ectoplasm-esque figures was saying in one of the paintings there. His work is filled with intricate detail, but strangely subdued color, a contrast that compliments the twistedly uninspirational messages coming out of the mouths of the characters in his paintings–words like “I con do it [sic] warts and all,” “Ummmm” and “God doesn’t give a shit about what country you’re from.” The works are less narrative than they are pure aesthetic experiments in texture and mood.

Back at Max Fish, Mr. Campbell had arrived and was standing behind the bar. His clothes were speckled with paint. This used to be his regular hangout when he lived down the street about 15 years ago. He is a calm and slow talker and his voice carries the laid-back drawl of his home state of California. He carries the vibe of a surfer that likes to meditate in his free time (his three feature-length films are, in fact, all focused on surfing). In conversation, he’ll say things like, “We’re all just energy anyway. Regardless of what you think everyone’s part of the same frequency and same vibration, you know?”

He now lives in the woods just north of Santa Cruz, “a real tranquil, mellow existence,” he said.

He was not the least bit stressed about only having a few hours to finish his mural, which was set to debut that evening at a party at the bar. When word came out last year that Max Fish would be closing for good, Mr. Campbell planned to make a painting about the death of the Lower East Side institution. The bar has since said it will try to stay afloat and Mr. Campbell’s painting now has a “non-death” theme, as he calls it. One of the figures in the mural is handing a pear to the other; the fruit bares the words “PEAR DOWN” and, homonym notwithstanding, it comes across as characteristically serene advice from the artist.

That advice to scale back could be directed to the financially-strapped bar that is housing his new work, or just as easily to the whole neighborhood. Since Mr. Campbell left it, the Lower East Side went from a small scene of artists, musicians, bars and hard drugs (there was a time when Max Fish was at the center of that scene) to become one of the most incessantly changing landscapes in Manhattan, with a new gallery or luxury condo popping up all the time.

“When I lived here before, it was like Max Fish, the Pink Pony and TG170,” he said, pointing in the direction of each neighborhood fixture. “Those were the three things on this whole block. Besides that it was bodegas and old fabric stores and drug dealers. It was kind of nice, just a little area that was real mellow and unto itself. But. Anyway. Change is normal. And it happened.”