Cat Man Do with a cat (Catexperts.blogspot.com)

Dr. Arnold Plotnick is a man on a mission. The New York native used to work with the ASPCA until September 11th, when he realized he could better help the world by opening Manhattan Cat Specialists, a boutique UWS affair that only treats kitties. His blog, Catexpert.blogspot.com, shows off the singular type of writing style you’d expect from someone who just really, really loves cats.

Surprisingly, New York City’s premier cat-only specialist (who goes by the pseudonym Cat Man Do), did not include the Jack the JFK cat in his 2011 listicle of  “13 (Educational) Feline Blog Posts of the Year.”

However, here is what he did include in his fun, I Can Haz Cheezeburger photo blog:

– Anatomy of the Feline Mouth – “As a cats-only practitioner, I don’t mind when people say that I’m looking down in the mouth, because the feline mouth is fascinating. Cats use their mouths for a lot of things – eating, drinking, grooming, and communication. Although cats breathe mainly through their nose, the mouth provides an additional passageway for air to enter the lungs.” – Language Barriers – (A whole section devoted to trying to treat cats of Dr. Plotnick’s Japanese customers) I run an all-feline veterinary hospital, and we have a fairly large Japanese client base…I felt terrible. I felt like the evil messenger. I would say something. Hiromi would translate. Po’s owner would become upset. Then there’d be silence. I’d say something again. Hiromi would translate. Po’s owner would cry. It’s weird to have a profession where you can really devastate someone’s life with one or two sentences. Cats are living longer than ever before, and I suppose it is human nature to wonder how a cat’s age would compare to a human’s. In talking with many people, I’ve discovered that the myth that dogs and cats age seven years for every one year is alive and well. I don’t know exactly how this notion came about, but I suspect many years ago someone decided that dogs live, on average, ten years, and people live, on average, seventy years, so dogs age approximately seven years for every one human year. This myth has been perpetuated for years, and frankly, it drives me crazy. First of all, cats live longer than dogs; this immediately skews the calculations regarding cats. Second, if you think about it, it’s not uncommon for some cats to live to be 18 or 19 years old. By the seven-to-one system, an 18 year-old cat would be equivalent to a 126-year old person. It’s true that people are also living longer than ever before, however, I’ve seen many 18 year old cats. I’ve yet to meet a 126 year-old person. I bet a lot of single ladies in NYC are hoping that the good doctor is single right now. Time to book an appointment, meow! 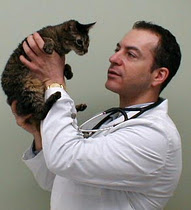