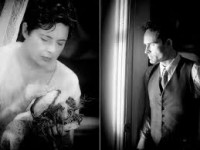 The Canadian filmmaker Guy Maddin has made a gangster film called Keyhole that appears to be loosely based on The Odyssey.

We’ve just had a look at the full trailer (thanks to Animal for calling our attention to it). It includes an unusually haggard Jason Patric—who plays Ulysses—performing obscure tasks like reaching out to flush a toilet and reluctantly stopping. A classic-sounding film noir soundtrack plays in the background. There’s also a disembodied voice that declares (appropriately, considering this is a film by Mr. Maddin), “Never trust your eyes, Ulysses.” Our favorite part is when Isabella Rossellini looks directly into the camera and says, “You’ve always been a terrible man.”

“I always kind of liked the idea of ghosts meet gangsters,” he said. “I’m so inept at genre pictures. I coulda made a straight up ghost story and it would still be one of my—alas—impossible to classify things.”

He calls the film “an autobiography of a house.”

It is shot in black and white and looks remarkably surreal, from what we can gather from the trailer. Monterey Media has acquired the U.S. rights for the film, so be on the lookout for a stateside release soon. Monterey also has what is likely the clearest plot summary we’ll ever get:

“A gangster and deadbeat father, Ulysses Pick (Patric), returns home after a long absence. He is toting two teenagers: a drowned girl, Denny, who has mysteriously returned to life; and a bound-and-gagged hostage, who is actually his own teenage son, Manners. Confused, Ulysses doesn’t recognize his own son, but he feels with increasing conviction he must make an indoor odyssey from the back door of his home all the way up, one room at a time, to the marriage bedroom where his wife Hyacinth (Rossellini) awaits.”