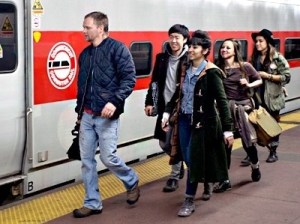 “Come for a day, stay for a week,” reads the tourism website of Cold Spring, New York. That’s a fine slogan, but it did not, alas, apply to our intrepid contestants on Bravo’s Work of Art: The Next Great Artist this week, who were destined to hop a train from Grand Central for a brief, nervous jaunt up and down the town’s Main Street, during which time they marveled at how picturesque (read: creepy) everything was and how weird the locals were, before fleeing back to the (much less weird and creepy) world of reality television.

“The name makes it sound like it has something to do with spa treatments,” contestant Young Sun Han murmured rapturously, as if he’d just discovered a Shangri-La for TV’s gay stereotypes. (Look, there’s village councilman Sean Hayes!)

“The further we get away from the city the more it looks like home to me,” Dusty meanwhile drawled sweetly. We’ve ridden Metro North’s Hudson Line, and the back lots of New England mini malls do not particularly resemble Arkansas’s amber waves of grain, in our humble opinion.

“Welcome to the quaint town of Cold Spring, New York,” says show hostess/rich person China Chow, looking like a Strangers on a Train murderess in a big trench coat. Two people were going to get the boot, we learned. But, “If you survive this challenge you will be competing for the grand prize,” Ms. Chow threatened. Survive this challenge? Is that what they’ve been doing with the eliminated contestants? The challenge, if you’re interested, was to take $200 and find a way to create a portrait of a verifiable, salt of the Thornton Wilder-ian earth Cold Spring resident.

KYMIA NAWABI
“I have laryngitis today,” rasps the first quaint resident that Ms. Nawabi hassled. But fear not, for Bob and Barbara, owners of some kind of haunted tchochke shop, rise to the occasion, proving themselves to be part charming Stars Hollow, part “all work and no play.” In Ms. Nawabi’s terms, they’re a solid blend of “weirdness and also sweetness.” The couple, we learn, has “always loved dolls.” So Ms. Nawabi makes a kind of dark, demonic Norman Rockwell painting of the duo, portraying them as ice skaters in front of scary antique miscellany—they skated on their first date. “The only non-conventional thing is that they’re going to have several arms,” artist mentor/auctioneer Simon de Pury frets of Ms. Nawabi’s painting. Which is funny, because when he gesticulates, he looks like a stop-motion photograph of a pitcher. “Get some weirdness in it,” he cautions.

YOUNG SUN HAN
Mr. Han makes a beeline to the nearest bed and breakfast, to inquire about spa treatments and also “town secrets,” because he’s clearly been watching The Witches of Eastwick, and believes the two go hand in hand. While he gets a guided tour of the inn’s nine rooms, variously furnished with Jacuzzis and wood-burning fireplaces he is left scrambling, at the very last moment, for a subject. Luckily, he pinpoints the next great artist of Cold Spring at the Terence Donovan gallery—namely, jolly Mr. Donovan himself, whom Mr. Han pays $200 for a 20-minute portrait. And guess what? Terence’s portrait is really nice—it’s got a little Karen Kilimnik, or even Elizabeth Peyton in its saucy yet tender broad-stroked depiction of its young male subject. (“You have kind of Justin Bieber-ish hair,” Terence says, which is totally something we can imagine Ms. Peyton saying to any of her sweetly puckish subjects.) In the gallery, Mr. Han leans Terence’s painting against a wall, behind wooden planks plastered with extreme-close-up photographs of Terence that he took of the artist while he worked.

LOLA THOMPSON
Having been soundly rejected by the town motorcycle guy, Ms. Thompson seeks out the men who are next on the list of people most likely to succumb to her witchy ways and nymphette wiles. Dennis and Tommy, rare-coin-collecting gentlemen, succumb to her flirtation, handing over a 1928 five-dollar bill to her. Ms. Thompson then prepares a multi-faceted, mostly non-figurative portrait/tribute to the two collectors, featuring a letter she wrote to them, which begins, “Dear Dennis and Tommy, You are the secret historians of Cold Spring” (or maybe not so secret…). There’s also some tinfoil, and a pyramid of blown-up images of historic bills, and some other things on a shelf.

DUSTY MITCHELL
Mr. Mitchell shyly settles on a little girl as his subject. She likes candy—“all kinds!”— and reminds the contestant of his daughter Cora, whom he abandoned in her infancy to go off to (an art-reality-TV) battle, and who, when this episode was filmed, had just turned one the previous day. Mr. Mitchell decides to make a mosaic of his young subject’s face from M&Ms. Mr. de Pury—who, in his most hilarious joke of season two, says he wants to “come to AR-Kansas”—briefly convinces Mr. Mitchell to work on a portrait made from folded-paper fortune-tellers, before the contestant runs out of time and returns to his candy idea. By that point, however, it’s too late for the glue to dry, so M&Ms keep falling off it. Mr. Mitchell hopes that everyone will find this decomposition “interesting.”

SARA JIMENEZ
Because she always seems wryly uninterested in everything around her, Ms. Jimenez drives away her first potential subject, before finding friends among the local firemen. One older firefighter, Jackie, is of particular interest to Ms. Jimenez. He’s battled blazes for 58 years, thereby inspiring a quite charming backlit portrait made from aluminum (which weirdly kind of resembles Mao) paired with an uninspiring dangly sculpture of aluminum and charcoal nameplates, one for every year Jackie served.

THE CRITIQUE
This week’s guest judge is pop-star portraitist Richard Phillips, who, for the record, is much taller than critic/judge Jerry Saltz and Ms. Chow, even in her crazy-tall heels, but maybe not taller than gallerist/judge Bill Powers’ hair. The local portrait subjects show up for the gallery showing, and luckily enough, none of them are perceptibly offended by their variously unflattering, candy-coated, epistolary and so forth depictions.

WINNER
Kymia Nawabi wins the first slot on the final episode for her cartoonish portrait because, as Ms. Chow says of Bob and Barbara, “I met them and they’re cartoons!” That’s not very nice, we think, and neither is Mr. Phillips’ comment on the piece: “At first I was throwing up inside.” But apparently none of that matters when you’re in the final trio of possible next great artists.

ALSO HEADED TO THE FINALE
Young Sun Han, who we think should probably be facing an intellectual-property/copyright suit from Terence right about now, slinks by, even though the judges point out that he should have just shown Terence’s painting. (Weird how the next great artist is not even a contestant on this show… Team Terence!) Sara Jimenez, meanwhile, also will compete in the final episode, mostly because Mr. Saltz is so proud that his little charge worked outside of her “comfort zone.” Personally, we’re freaked out that she referred to her portrait of Jackie (who’s alive and thriving) as a “memorial.”

GOING HOME
Dusty Mitchell is at last taking that long covered-wagon ride back to Arkansas, mostly because too many of his artworks were literally paint-by-numbers pieces. And Lola Thompson will hop Al Pacino’s jet back to Los Angeles because Ms. Chow doesn’t understand why the currency pyramid counts as a portrait (odd, since Ms. Chow resembles money). Also, it’s too scattered in its abstraction for the rest of the judges. And there is much crying.