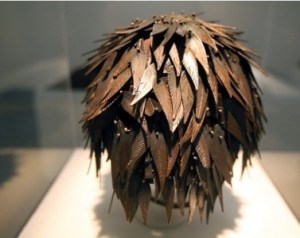 So long, farewell, auf wiedersehen™, adieu. Last night, it was indeed that time again, that tragic hour when the last of the fresh-faced gaggle of not-so-good artists must wave goodbye to the party, that art world soirée to which only the greats are invited. For Wednesday heralded the finale of Bravo’s Work of Art: The Next Great Artist, that solemn, two-season-honored tradition wherein the future of Western culture is determined on reality TV.

In the first nine episodes, our abundantly tressed, and fancily dressed show host, China Chow, shed copious tears over the elimination of eleven contestants, leaving us with just three contenders for the preeminent title in the vast arena of competitive fine-art television programs. Young Sun Han, Kymia Nawabi, and Sara Jimenez would be the lucky artists given the opportunity to spend three months and $7,500 preparing a final gallery exhibit “to blow the art world away,” according to Ms. Chow.

Two months into their labors, super-suave auctioneer and contestant mentor Simon de Pury would swing by — driving hilariously tiny Fiats, “furnished” by the show’s auto-making sponsors — to check on their work. (One can only imagine that his home kingdom issued a special license to him just for the occasion, much like when Prince William motored away from his royal nuptials. Or else the whole driving montage was prepared in front of a green screen, with Ryan Gosling as a backup stuntman/body double.)

Eventually, each member of the trio would hang work in a final gallery show, hosted by Mr. de Pury in the Phillips de Pury & Company galleries. And then, finally, the victor would be wreathed in (non-literal) laurels. He or she would fulfill his/her destiny: To receive a solo show in the “world famous” — lest you forgot since last week how widely its renown reigns — Brooklyn Museum, a cover story in the utterly mysterious and potentially nefarious Blue Canvas magazine, and $100,000 courtesy of Fiat. One work by the winner would be auctioned off at Phillips de Pury, with all the proceeds going to the artist. Basically, if you had taken as a given that there were any stakes at all in this competition, they were as high as they ever would be last night.

YOUNG SUN HAN
“When you come back into town, don’t bring the PC parade with you,” lofty-haired gallerist/judge Bill Powers cautioned Mr. Han before the contestant headed off to Chicago, Illinois to prepare for his final showing. And he doesn’t: After nixing a project featuring some kind of road-tripping South Korean security booth — which Mr. de Pury quite rightly deemed “boring” — Mr. Han brings a funeral procession to the gallery.

He decks his allotted space with strung-up shirts belonging to his late father, to which Mr. Han affixes photographs of his father wasting away in a hospital. He also puts together a morbid shrine displaying the contents of his father’s pockets at the time of his death. Also, Mr. Han tosses in some projected photos of his mother, who is battling cancer, as well as random portraits of his hunky stock-analyst boyfriend.

“It’s about family, losing someone, and the full circle of going through life and death,” he explains. “I’m really hoping that the show puts people through the gauntlet of emotions.”

KYMIA NAWABI
Ms. Nawabi doesn’t even have to leave the borough to get to work on her final pieces: She lives in Manhattan with her boyfriend, a photographer and bartender with whom she worked at a Turkish restaurant, and his parents. And when Mr. de Pury comes calling, she whips out a photo album featuring pictures of her mom (a total babe) and her dad, who, you might recall, died in a tragic jet-skiing accident. And here’s where it gets weird: in the photos, her family is jet skiing. This makes Mr. Han’s death-candy totem look tame.

Anyway, Ms. Nawabi has, at the time of Mr. de Pury’s visit, vaguely settled on ghosts and religion and stuff as the subject of her final body of work. She shows the aristocratic auctioneer some horrible, kitschy sculptures — imagine a Cabbage Patch doll of a dead kid with diamonds balanced on its eyeballs — which Mr. de Pury calls “horrendous” as Ms. Nawabi weeps. “It’s the last thing I would ever want to own,” he adds, winning our best slur of the season award.

Handily enough, when the final show rolls around, Ms. Nawabi has completed a series of well-crafted drawings portraying strange scenes of ghosts and mythological beasts and nightmare creatures. Details from these drawings have also been recreated as 3D forms in the center of the room, but these sculptures really can’t stand up to the beautifully executed works on the walls.

SARA JIMENEZ
Back in Brooklyn, Ms. Jimenez lives with some gross futons and her boyfriend, who seems wary about the whole relationship. (When Mr. de Pury inquires as to how long they’ve been dating, the cagey gentleman quickly responds “less than two years.”) But her studio is filled with a promising array of work: She’s executed a performance piece on the street, for which she dressed up as a bobble-headed, white-clad monster who solicited confessions from strangers, writing down their weightiest problems. If she approached us, we’d probably run screaming from the giant mosquito/bird/cult-leader — you know, if you see something say something — but she seems to actually have gotten people to collaborate, chronicling their lust, addictions, and desperation, which is impressive.

She ditches some of her lame early paintings and sculptures, creating a final array of works, relating to the confessions she collected, in every medium — there’s a bird cage from which 1,000 paper cranes burst, a haunting dead-skin-cell self-portrait, a mattress filled with hypodermic needles, lingerie made of human hair, and a hot-glue cobweb. It’s all kind of Tim Hawkinson meets Kiki Smith, and if I got to choose right here and now, she would win.

THE FINAL FINAL CRITIQUE
The whole gang of judges and contestants of seasons past and present has gathered for the gallery show. Everybody’s favorite former slimeball contestant the Sucklord even shows up with a gift for art critic/judge Jerry Saltz, who only recently eviscerated him on TV: a glow-in-the-dark action figure of a certain “bald Jewish art critic,” the traditional present for the second night of Hanukkah.

The exhibit, primarily, is a testament to the fact that when artists have three months instead of three hours to make work, they do a better job. But that’s not what Mr. Powers, Ms. Chow, stony-faced Mr. Saltz, and guest judge/contemporary artist KAWS (who is soft-spoken and newt-like) have gathered to discuss. Across the board, Mr. Saltz seems to applaud contestants for working outside their usual mediums, while Bill Powers — who is incidentally more tan than any other person in the history of the world, excepting Oompa Loompas — likes the more single-message, limited-medium displays.

Mr. Han’s “Bool-sa-jo” (Korean for phoenix, his mother’s nickname for his dying father) elicits the comments of “sympathetic magic” and “really brave” from Mr. Powers, but irks Mr. Saltz with its straightforward, relentless drive toward meaning. “In some ways you don’t leave a gap for mystery, and that can shut out a viewer,” Mr. Saltz insightfully comments. But of course, the piece makes Ms. Chow cry. (Mr. Han’s mother, meanwhile, offers a perfect mom-comment, with her tear-free “you did a nice job.”)

“Not for Long, My Forlorn,” is the title of Ms. Nawabi’s expertly executed exploration of a mystical afterlife, over which Misters Powers and Saltz bicker again, but the general consensus is that the works are lovely, especially the one that (ick) depicts a boat and is an ode to her father — who, let us recall once again, died jet skiing.

Ms. Jimenez’s “Anonymous Contemplations,” makes den mother Ms. Chow effuse that she’s “so proud,” and Mr. Saltz admit that the showing represents “the most life I’ve seen in your work.” Alas, Mr. Powers thinks the eclectic arrangement “felt like it was kind of a collection of short stories… a little scattershot,” and so — drum roll, please — it is not Ms. Jimenez (the second runner up), nor Mr. Han (the first runner up) who ascends to a plane of art-world greatness.

Rather, it is Kymia Nawabi who is now, officially, according to the Powers That Be (at Bravo) the Next Great Artist. To which we can only respond in Ms. Nawabi’s own words: “Not for Long, My Forlorn.” For forlorn she shall be, when season three rolls around, and the next Next Great Artist takes her place.