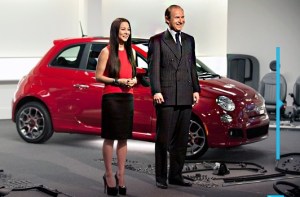 The art world is in Miami. The Sucklord has been booted from the rarefied realm of reality television and is lurking somewhere, probably in Miami. So what do we have left, here at home, to be thankful for? Why, the fact that the search for the next great artist continues for us on the Bravo cable television channel, of course. On Wednesday night, there were seven contestants left in the art-critical arena, and yes, they were challenged, as all artists have been since time immemorial, with the task of creating art to please car-manufacturing television sponsors.

The gang was shepherded to some kind of Fiat showroom, filled with automobiles old and new, where they were informed by vaguely aristocratic reality show mentor Simon de Pury, “The automobile has been an inspiration to artists since they were invented.” (Since artists were invented? Or automobiles? Ah, the Fiat and the ovum paradox.) “Fiat understands how important new inspiration is to the creative spirit,” Mr. de Pury explained, for those of us who were still confused. Richard Prince, John Chamberlain and similarly likeminded auto-loving artists were all, we learned, inspired by the auto-art-industrial complex.

The contestants were then tasked with crafting art using Fiat car parts—quite the serious assignment given that the winner was promised $25,000 “furnished” by the Fabbrica Italiana Automobili Torino (Fiat). (Some very preliminary late-night research determines that you might even be able to buy a new Fiat 500 Sport 150 hatchback for slightly less than that amount. Now we’re talking, Bravo!) “Looks like you guys took the whole car,” show host/socialite/couture hound China Chow exclaimed, just like she did in that weird dream we had last night.

DUSTY MITCHELL
Mr. Mitchell is a man. He likes wood. He does not, however—and at his own admission—know much about cars. He had an aunt who broke her nose in a crash when he was in the second grade, but that’s hardly impressive to Work of Art viewers after the episode featuring fatal jet-skiing accidents, surely. He briefly goes down the making-a-mold-of-my-own-face (eyebrow-loss-be-damned) route of artmaking well known to all desperate art students, before settling on a satisfying, if not stunning, piece that transforms tires into a rolling stamp that spells out, “going to work going home.”

YOUNG SUN
“I’m worried about this challenge… I’ve never owned a car. My favorite car when I was a kid was a limousine because someone else was driving you,” Mr. Sun confided early in the episode, before discussing making out in cars with boys—the combined revelations fulfilling a weird Judy Garland gay stereotype for much of America. Destroying this stereotype (without making particularly compelling art), Mr. Sun then constructs an Exterminator-style robot, which is limply hung from a canvas.

MICHELLE MATSON
Ms. Matson has almost definitely read J.G. Ballard’s novel Crash. If she hasn’t, she should, because she would love it. But, notwithstanding the fact that she was recently the victim of a grisly hit-and-run accident, she sticks to her hip, wryly cartoonish roots and crafts a semi-creepy, but mostly Disney/Pixar-ish gleaming car hood above a sad-sack car hood (the animation of which should be voiced by the ghost of Paul Newman). She ditches an early, fabulous “fetishist window-licker” balloon piece, as well as a giggle-worthy Titanic-inspired fogged window piece for her lackluster happy-car/sad-car construction. But come on, she’s on reality TV! She has to know that if she doesn’t delve into her gruesome past to create something about her most horrible life experience she’s in trouble. Also, she says, “I like how this challenge is so open; like you could do whatever you want,” which is, officially, in the Book of Revelation, the beginning of the end.

SARA JIMENEZ
According to drunken photos of Ms. Jimenez in her drunken youth, it’s good that she never learned to drive—and thank goodness for the healing power of art-on-television, which has helped her “recover in these areas” of intoxicated, debauched behavior. Anyway, for the challenge, she employs a muffler, from which she constructs an angular sculptural formation of foam. It’s better than her usual bulimia-themed twee drawings, but so is a regular, unembellished car muffler.

LOLA THOMPSON
Ms. Thompson is a witch, as it turns out, if you hadn’t already checked to see if she floats. (And not just in the way that TNT turns the word “bitch” into the word “witch” in their television-version of movies… they know drama.) She’s brewing up mineral solutions and her grandmother was a “witch and a healer” who taught her “witchy ways.” Oh wait, scratch that, now she’s making a drawing about her dad (not Al Pacino), and how they went on a road trip to the Grand Canyon. Also, she may or may not be planning to “do like a Tanya Harding” on Young, meaning she’s going to do a triple axel on his ass.

KYMIA NAWABI
Hey, Judy Garland, check this out—Ms. Nawabi is making “stardust” out of a car key. And gallerygoers are going to watch it glitter in some kind of kaleidoscope box.

SARAH KABOT
This contestant owns a bear skin and a buffalo skin rug: two more kinds of skin rugs than Gallerist has in our collection. This fact, along with her father’s very recent death, has inspired her to affix two “skinned” car seats to white canvases—a pair of Rorschach blots representing herself and her late progenitor.

THE CRITIQUE
Photographer and performance artist Liz Cohen joins the judging panel this week, qualified to weigh in on the challenge because of her series of photographic self-portraits for which she posed semi-nude near automobiles (think: Indy 500 meets Laurel Nakadate). Dusty Mitchell and Young Sun are deemed safe for their fair-to-middling art.

Meanwhile, Sara Jimenez and Sarah Kabot are commended for their top-tier works—Ms. Jimenez, because her piece reminds gallerist/judge Bill Powers of Superman and because, according to critic/judge Jerry Saltz, “It’s like a flower arrangement meets an exploding crystal meets a backfire from a car.” (Now we know, very specifically, what to get Mr. Saltz for Christmas.) Ms. Kabot because… OK we don’t remember; we were distracted by Ms. Chow’s epically gross hair extensions, which have reached religious cult-mandated lengths. Ms. Jimenez wins the cash prize, which she will use to go to grad school and cry more.

The bottom-three contestants, “ended up spinning their wheels,” Mr. Saltz jibbed excruciatingly. Ms. Thompson has too many incoherent ideas, and Ms. Nawabi’s piece is literally broken, but it is Ms. Matson’s piece that, according to Mr. Powers—who has no regard for the fact that Ms. Matson’s was recently mowed down by a reckless driver—is “caught in the headlights,” so she’s kicked off.