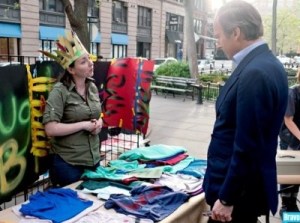 Selling art to Simon de Pury, on Work of Art

“The following program may contain material that is unsuitable for young viewers. Parental discretion is advised,” read the ominous title card preceding last night’s episode of Bravo’s art-world reality romp, Work of Art: The Next Great Artist. Immediately thereafter, the sassy sex-kitten contestant, Lola Thompson, — who probably still gets carded trying to buy tickets to R-rated films — proclaimed, “I need to put more of myself out there to show the judges more of who I am.” One didn’t really need to keep watching. It was already clear that Ms. Thompson was going to get naked.

But first she had to tag along with the rest of the program’s straggling competitors to Tribeca Park, where three street-vendor booths, complete with middle-school-book-sale cash boxes, were set up. “Throughout history artists have always faced a struggle with art versus commerce,” lectured bespoke-besuited contestant-mentor Simon de Pury, who, in his real-life role as mega-auctioneer is perhaps particularly attuned to the plight of artists struggling against the lords of art commerce. “For your challenge, it’s time to sell out,” show host China Chow added [insert your own joke here about Ms. Chow and expertise in selling-out].

The contestants were told to break into pairs (although no teamwork was demonstrated from that point onward) and create physical artworks to sell to passersby over a two-hour period. The team that earned the most from their sales would gain immunity in the next challenge and $30,000 — furnished, of course, by the ever-more-mysterious Blue Canvas magazine, which is officially the last magazine in the world to have mountains of money to throw at artists, and possibly un-great ones at that. Also, some version of whatever the contestants were selling had to be suitable to be hung in a gallery show.

SARA JIMENEZ and YOUNG SUN HAN
Since the show has run out of shocking revelations to whip out when the art stuff gets boring, we’re left with dull disclosures such as Ms. Jimenez’s “I’m a really fast draw-er,” or the fact that she’s on unemployment (the better to buy chunky necklaces with!). We also learn that Mr. Han’s boyfriend likes his “very petite, round, and pert” butt. So it makes sense that the duo chooses to play up their better features, racing to American Apparel and purchasing “cheeky” (ha!) shorts to wear and also to draw on.

They rake in the cash because Ms. Jimenez not only peddles her usual moody bloody-vagina-filled watercolors but also milks that age-old cash cow of sketching people’s portraits for them, on demand. Mr. de Pury clarifies his sexuality for anyone who was confused by his impeccable tie collection by saying that he “can do without” Mr. Han’s tiny shorts, but then gasps “Oh my god, it’s getting better and better,” upon glimpsing Ms. Jimenez in an identical item of clothing. Back in the gallery, Mr. Han displays brightly colored paintings of men’s briefs emblazoned with smiley faces (think Joe Boxer 2.0) as well as Sharpie-drawings of ghosts (or something) while Ms. Jimenez throws up some of her wan paintings.

KYMIA NAWABI and DUSTY MITCHELL
At first Ms. Nawabi considers crafting notecards that state “support artists,” which she would give to people who made a “donation,” because she’d much rather think of the challenge “like a fundraiser” rather than as selling out. “The person who donates this amount to us will have something to take away with them,” Ms. Nawabi says, revealing that she believes that she gets all of her food and clothing and art supplies from nice people, to whom she donates money. Anyway, she scraps that idea and instead sells slips of white paper bearing her signature for $5, also acquiring her buyer’s (clearly worthless) signature in the exchange. In the gallery, she hangs a grid of her signatures alongside the signatures of strangers.

Dusty, we discover, has a t-shirt company named Dirt back home in the boonies, so he’s psyched to make political tees, featuring a red-outlined map of America, in the center of which is a black surveillance camera, which looks like a Fruit Roll-Up. In the gallery, he presents a road sign bearing the same insignia. It’s all pretty abysmal but he starts crying and talking about his baby — “she needs me to survive; that makes me feel bad because I’m here and I’m not there to give her what she needs right now” — and it’s really sad and makes us think he won’t get the boot this time around.

SARAH KABOT and LOLA THOMPSON
Try to imagine a “hipster, cool, Native American paper headdress,” which, according to Ms. Kabot, is “cool but not hippie.” Now add t-shirts that are “sexy but also playful,” so the whole shebang is “like a craft fair — quirky but fun.” Yes, Ms. Kabot’s idea was just as whacked out and incoherent as all that sounds. And of course, since she’s Ms. Thompson’s partner on this challenge, she has to incorporate boobs and penises, which she spray-paints on the white gallery walls beneath her paper crowns.

And finally, ladies and gents, the moment we’ve all been waiting for. Yes, Ms. Thompson gets naked and snaps a self-portrait. On top of this photograph — in which we can plainly view the nipples and bushy region that are so daintily blurred out when Ms. Thompson is briefly shown, on video, in the buff — is printed a rainbow litany of self-deprecating, awkwardly wry confessions. It actually looks like an American Apparel ad: Dov Charney and Terry Richardson would both no doubt give it two thumbs up. Mr. de Pury, meanwhile, actually puts his reading glasses on to inspect Ms. Thompson’s “piece,” admitting, “it’s very difficult for me to focus on the text because I’m a little sidetracked by the background.” But basically he likes it: “I think it’s gorgeous and very attractive,” he murmurs.

And if that isn’t your thing: those shoppers not wishing to throw down for this particular Vice magazine cover, are invited to pay for a personalized secret from the artist. A three-year-old girl forks over 25 cents and gets a tidbit whispered in her ear — one so disturbing that she begins to weep.

This team doesn’t make off like bandits, but they do O.K., except for the fact that everyone hates Mr. Mitchell’s road sign, and basic concept. “Why didn’t they buy the sign?” critic Jerry Saltz jibes, before raising his hand, calling on himself, and snickering, “I know why… because it’s awful!” (It is true that someone mistook the surveillance camera for a mailbox and gallerist Bill Powers thought it was a printer cartridge). “It just was kind of, ‘Here’s a map with a camera on it,’” Ms. Chow adds, pulling out the big guns from her art-critical artillery. People enjoy Ms. Nawabi’s work, though, because it’s literally what she sold on the street, pinned up in the gallery.

Obviously people like to buy pictures of naked women, but gallerist and guest judge Jeanne Greenberg Rohatyn makes Ms. Thompson’s piece sound better than that by explaining,“the nudity was what you attracted the public with and then when they sat down with you, you gave them something even better.” Of Ms. Kabot’s pervy craft project, Mr. Saltz begins, “What we’re seeing in the gallery may not be art because it comes off as a…” “Halloween costume,” says Mr. Powers, finishing the sentence of his peer (and in the process revealing that he must have worn some very strange outfits trick-or-treating back in the day). It is Ms. Kabot, by the way, who is given the old heave-ho and kicked off the show.

“Excuse me? That’s men’s underwear?” Mr. Saltz, who we now have reason to believe is a boxers man, says of Mr. Han’s paintings of briefs. “Is this your assumption — that we’re so limited that we can only see a painting as a work of art?” Ms. Greenberg Rohatyn jeeringly adds. Nobody, however, asks how a painting of a bloody naked lady got mixed in with Ms. Jimenez’s portraits of people in the park. Because she has supplied the two things people love: naked ladies and pictures of themselves. So this team wins.