TRENTON – AARP of N.J. is making its own year-end push against the rumored-to-be-moving, Verizon-backed telecommunication and cable deregulation bill. The bill, S2664, is framed by the group as an attack on “lifeline services” that necessitate government regulation. They’ve headed off the bill in the Senate three times since passage in the lower chamber earlier this year.

AARP hosted two other opponents, state Sen. Bob Smith (D-17), of Piscataway, and Stefanie Brand, who heads the state’s Division of Rate Counsel, for a tele-town hall today. Thousands of retired and interested New Jerseyans called in and asked questions about the initiative.

Smith told participants that 95 percent of senior citizens have landline phones, but that the regulations addressed in the bill are exactly those that guarantee landline service is universally available and affordable.

He said that in states where these sort of deregulations are passed, the cost of service for landlines increase between 100 percent and 150 percent over two years. “There is no part of this state that is not impacted,” he said.

The bill also removes regulations ensuring bill credits for outages, free of charge service visits for equipment malfunctions, and in-use quality of landline services. “It will leave the consumers at the mercy of the telecom companies,” Brand said.

She said the recent $3.6 billion deal struck between Verizon and two cable outlets, Comcast and Time Warner Cable, is also troublesome if it further limits the already minimal consumer choices in the industry.

The main regulation addressed by the bill dates back to the days of former Gov. Woodrow Wilson, when Verizon’s corporate lineage was granted access to ratepayer-funded copper wire systems, in turn for promises to provide service to any resident in any part of the state – which can be an expensive enterprise.

Smith also pitched his own bill, S3062, which is an alternative measure that would maintain basic regulations but allow for a study of whether any laws are over-burdensome to the industry. Among the supporters, he said, are incoming Majority Leader Loretta Weinberg (D-37), of Teaneck; and state Sens. Ronald Rice (D-28), of Newark; and Jeff Van Drew (D-1), of Cape May. 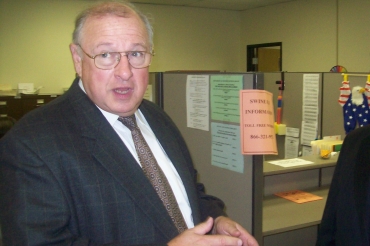