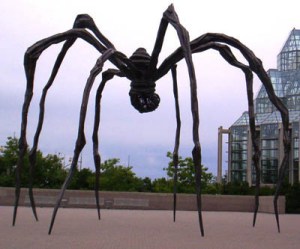 The first solo survey of the work of Louise Bourgeois in the Middle East will open tomorrow at the Qatar Museum Authority Gallery. The show will “contextualize” Bourgeois’s sculpture Maman, a massive bronze spider that went on view last month at the Qatar National Convention Center in Doha.

The show, curated by Bourgeois’s former literary archivist, is called “Conscious and Unconscious.” It will showcase work from the 1940s up until the last years of the late artist’s career.

Last month, the Qatar Museum Authority was involved in the installation of a giant Richard Serra sculpture in Doha, the artist’s first public work in the Middle East.