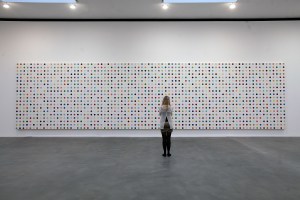 Last week, Gallerist posted an interview that Anthony Haden-Guest conducted with Damien Hirst on the eve of the opening of his 11-gallery spot painting show at Gagosian Gallery. Now, with the show opened and reviews streaming in, Mr. Haden-Guest used that interview as the springboard for a fuller account of Hirst’s spot project.

Damien Hirst is the central figure in two remarkable art world phenomena at present. One, of course, is Larry Gagosian’s multinational 11-gallery show of a quarter-century of his spot paintings. And the second has been the sometimes pained, even moralizing commentary in the coverage of that event.

But I’ll get to that.

I caught up with Mr. Hirst in the Gagosian on West 21st. He was wearing a scarlet knitted cap, two fistfuls of skull rings and a Joe Strummer T-shirt and came across as at once placid and mercurial. Manhattan was the appropriate city for him to be on opening day. He had been in the Gagosian Gallery at 980 Madison two years ago, looking over the calendar, when he had his lightbulb moment.

“There were nine galleries and nine different artists,” he recalled. “And I was like, what if that was all my name? I was looking to do a museum show of spots. I don’t think there’s many artists that could do all the galleries. And only my spot paintings would really work, and fill all the spaces. It was kind of a unique thing.’

Couldn’t he have done it with his spin paintings?

“I think it would be repetitive. After two galleries you’d kind of lose interest. There’s not so much noticeable changes over the years in the Spin paintings.”

The spots were born of frustration. At Goldsmiths College, in London, in the mid-’80s, Mr. Hirst was making Kurt Schwittersesque collages. He decided to take away the backboard and arrange the objects on the wall. “I thought that was a massive breakthrough,” he says. “But then I remember thinking, ‘Tony Cragg was doing this 10 years ago.’ I was thinking I was moving forwards but actually I’d gone back. I was nowhere near up to date.”

In 1988 he organized “Freeze,” an exhibition of work by himself and his fellow Goldsmiths’s students, in a disused warehouse in Surrey Quays, in London’s Docklands. His contribution was a clump of cardboard boxes slathered with house paint. “I was always walking around, looking for things and picking them up and putting them in paintings,” he said. “It was always to do with things found in the real world. Arranging found objects.”

Mr. Hirst began making spot paintings around that time, when he was sharing a studio with another Goldsmiths artist, Marcus Harvey. “I just got rid of everything,” he said. “That was a shock. I didn’t want to use canvas. I didn’t want them to be associated with making a painting, really. So I just did them on the wall.

“It would be as if a machine had come along, just rolled along the wall and printed it and gone away. So it was almost doing away with the artist as well. And then after doing, I don’t know, maybe 12 or something, painted on the wall, I tried one on canvas.”

Mr. Harvey called him earlier this year to say he had found a rolled-up Hirst. That was the one.

“It was quite a big painting. It was all cracked. And it goes right to the edges. And it’s got one black dot on it. And I’ve never painted a black dot ever again. Because it stood out. All the colors were there but the black stood out.”

That canvas, which is now on view at Gagosian’s Madison Avenue space, would take Mr. Hirst’s career into a brand-new phase. The vitrine pieces that had brought him to attention—like the famous shark-in-tank The Impossibility of Death in the Mind of Somebody Living—had been one-offs. “I had never really planned something out that I knew was going to work,” he said. “Whereas with the dot paintings, it’s really quite strange. I never wanted to just do one. Or do six and call it a day. I always wanted it to be an endless series.”

Mr. Hirst had his assistants choose and apply the colors, insisting that they not repeat on the same canvas. “Anything to not make a decision. Getting other people to make decisions is a good way to not make decisions,” he said. In fact, of course, he was no more a machine than Andy Warhol had been. “I would always be able to go in and if I saw anything I didn’t like I could change it. Because people are rebels, aren’t they?”

Then he began organizing the tins of pigment on the floor in a grid equivalent to the number of spots on the piece being worked on. “I think my whole career is about the romance of painting in some way,” he said. “The idea of painting. I went through Conceptual art. The Spot paintings are definitely Conceptual art. There’s an optimism to them which is amazing. They never look tired. I think even a Spin painting looks tired after a while. The Spot paintings, they never stop moving. They never get tired.

“I just got the idea to do the very, very tiny spots. And I think they are so different to anything I have ever done before. There’s two paintings. They are millimeter spots. The one with a million dots is about three meters by two meters, something like that. When I worked out the million-spot painting I kind of worked out how to do it, how long it would take. And then I thought a million is such a freaky amount. I need to do two million. And that implies endless millions. Whereas one million, you think, that’s it! It’s the end! You think you can’t do more than a million. But if you do two million, it’s like 10 million or a billion. So the biggest one is two million. They are going to take years to make.”

A frightening thought, really, I said.

“Yes! It’s fucking mad. The human eye might not be able to see them. If you go to the microscopic ones you can spend the rest of your life working on something that’s a millimeter across. Fucking nuts! When I’ve done those I can’t see myself doing any more. I want them to be an endless series but I want them to be sort of infinite. An endless series is two things. It makes them infinite but it also connects them with my life. I want to imply it rather than do it. So I’m torn all of the time.”

This endless series of spots picks up on the preoccupations with death and entropy that are central to Mr. Hirst’s work. “What I find difficult now, looking at this show, it’s 25 years of my life. And I don’t like that at all. Because when I first painted them it was this brand-new thing and I felt immortal in a way. The time was right. We were fucking dancing on the tables, changing the rules, nothing could stop us.