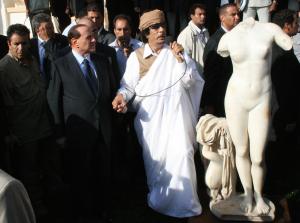 Gaddafi and Mr. Berlusconi admiring a headless statue of Venus in 2008. (Mahmud Turkia/AFP/Getty)

When a repatration case involving Italy makes the news, its typically that nation’s officials who are in the position of calling for an object’s return, but the role reverse this weekend, with Italy returning to Libya a 2,000-year-old statue that was smuggled out of the nation in the 1960s, according to the AP.

The statue depicts the head of Domitilla Minor, the daughter of first-century Roman emperor Vespasian. Newly minted Italian prime minister Mario Monti made the handoff on Saturday, his first visit to the cross-Mediterranean nation since the death of deposed dictator Muammer Gaddafi.

Over in the Financial Times, Guy Dinmore recalls that time in 2008 that former Italian prime minister Silvio Berlusconi cozied up to Gaddafi by giving him back a headless statue of Venus that had been stolen from the nation. Gallerist found a photograph of that special moment on Getty. It’s posted above.