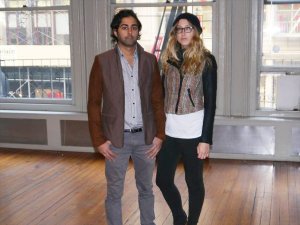 Mr. Vora and Ms. DeWoody in the new space.

Art world start-ups Artlog and Grey Area will soon move into a spiffy new office space in SoHo, nestled between Silicon Alley and the Chelsea/Lower East Side gallery scenes. The news of the new offices was first reported by a Business Insider day-in-the-life profile of co-founder Manish Vora (described by the site as the “Young Man [who] Quit His Wall Street Job on a Mission to Change the Art World,” an upgrade from a previous story that called him the “Guy [who] Left Wall Street to Launch an Art Industry Startup“), but the deal was not yet final.

“Our building has a long history of having artists,” Mr. Vora told The Observer of the 2,000-square-foot space at 547 Broadway (at Prince). “It’s still a co-op building, and it’s one of those buildings where artists, by luck or by brains, managed to purchase those units, in the ’80s and ’90s at 1/20th the cost that it would be today.”

Grey Area, the company’s art-meets-design retail site founded with Kyle DeWoody, will showcase its products in the second-floor space, and Mr. Vora said there are plans to exhibit works by a few “very well-known SoHo artists.”

He said the company plans to move from its current Williamsburg space in February.