Another Bergen event last night created the next installment of the ongoing reality show North Jersey Democratic Gubernatorial Primary 2013, a drama that so far highlights the movements of two party brand names who must weather each other – in addition to the term “former” at the front of their official titles.

Both pre-and-post Chamber of Commerce trip, PolitickerNJ.com talked to insiders who agree that Buono is definitely running for governor; Codey is doing everything that suggests he’s running; and as co-victims of South Jersey Democratic Party power flexing, both (as vocal opponents of pension and benefits cuts) would compete for the progressive and public sector wing of the party in a primary battle, including others bruised in the Christie-South Jersey-Joe D. government era: teachers, cops, firefighters and other public sector workers.

Driving up to bellwether Bergen from her own Middlesex County, Buono attended numerous swearing-ins of Bergen dignitaries in the last several weeks, including Bergen Clerk John Hogan, the freeholders and last night’s Dressler.

The Essex County-based Codey has attended a more strategic handful – and at those events carried a public advantage over Buono in that he’s also the former acting governor of New Jersey, a title that makes him microphone material in front of any audience.

Last night was a case in point.

Dumped by Senate President Steve Sweeney (D-3) in favor of Bergen’s own Senate Majority Leader Loretta Weinberg (D-37), Buono arrived with no blare of trumpets, and absent even the most courteous invocation from the front of the room. By contrast, Codey received a mike and the entreaty to talk. He promptly regaled the crowd with an anecdote from his recent radio show interview with former New York Governor David Patterson.

Codey pointed out to Patterson that it was funny how both men became governor because their predecessors had illicit sex.

The Patterson story reminded people of Codey’s gravitas status as an ex guv who has the ability to generate media attention. The former governor’s most erstwhile backers crack that Buono is already competing for lieutenant governor in the Codey universe, a suggestion Buono’s troops dismiss as ridiculous.

Whatever his built-in advantages as a statewide brand name, insiders see Codey making moves and lining up meetings with current and future party chairs statewide but are finally not sold on him finally pulling the trigger on a run.

“I don’t think it happens,” a powerful Democrat and Codey fan told PolitickerNJ.com on the D.C. Chamber of Commerce trip. “We’re telling him he has to make a decision at some point and he acts like a candidate but I don’t see it in the end.”

The source speculated that Codey’s scrap last year with Christie over Codey’s security detail was the front office’s way of telling Codey that Christie can – and will – make the former governor’s life miserable if he runs.

It also goes back to 2005 and Codey’s decision not to challenge then U.S. Sen. Jon Corzine in a primary for governor. That decision to get muscled by Corzine’s money now convinces party players that Codey won’t put a political legacy and West Essex empire at risk against a political behemoth like Christie, not to mention a Democratic Primary firefight with Codey nemesis George Norcross III.

The same sources see Buono as determinedly committed, a fearless competitor whose wounding within her own party could also springboard her more convincingly with progressives in a Dem Primary, but who finally currently lacks Codey’s brand intensity.

“I love Barbara,” a Bergen Democrat told PolitickerNJ.com this morning, “but she doesn’t have name ID and she’s not like, say, a Bill Pascrell, who’s a great retail politician who runs into a room and grabs every hand in sight. Barbara doesn’t do that. She waits.”

Deprived of a Senate majority leader microphone and lacking the meaning at least one of Codey’s “former” titles gives him, Buono nonetheless shows no signs of slowing on the long campaign trail, regardless of Codey’s activities. And while they continue to see a considerable lot of each other treading and re-treading those counties, as yet neither Codey nor Buono discerns a clear-cut Democratic Party alternative out of South Jersey, leaving them to wrangle at the moment over the same turf.

“At one point, the two of them, Dick and Barbara, will have to form a coalition,” said a source, “which would be compelling in a Democratic Primary, where most of the primary votes are in the north, in Hudson, Essex, Middlesex, Union, and Bergen.” 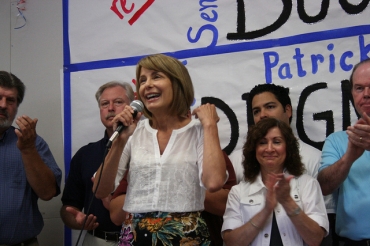