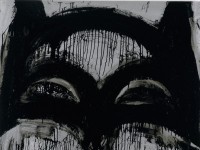 Are zebras black with white stripes, or white with black stripes? Fuggetabout It I, the first installation in Joyce Pensato’s exhibition “Batman Returns,” begins with a black and white photo of Marlon Brando as Don Corleone in a soiled frame, pocked with staples, hanging tilted by the gallery’s front door. Ten more head shots—Eddie Murphy, Joe DiMaggio, Al Jolson in blackface—all splattered with drips of black enamel paint, proceed under the front desk to meet Chris Rock; Minnie Mouse; paper cut-outs of Bart and Maggie Simpson surrounded by serrated lines; an age- and dirt-blackened stuffed Mickey Mouse; a snapshot of a black couple on their wedding day; Brando as Corleone again, with Al Pacino as Michael; Andy Warhol and Jean-Michel Basquiat posing in boxing gloves; a black collie in a sombrero; Aunt Jemima; a sideways Sopranos poster; a giant foam Mickey head, covered in Christmas lights, missing its eyes and ears, set next to a plastic Santa and Frosty covered in multicolored enamel drips; a stuffed Timmy from South Park; a lenticular postcard of zebras in the wild; and snapshots of Hillary Rodham Clinton, Desmond Tutu, Muhammad Ali and the artist herself as she poses diagonally across other people’s photos of their children posing with human-size Mickeys at Disney World.

The stuffed animals all look like rescues from the dump, but they’re rescues that have been thoroughly brushed. Despite the sheer number of elements—in addition to the drip-marked milk crates, step stools, drop cloths, turpentine cans, brushes and photos, successive Fuggetabout Its include Big Bird, Pluto, a large easel, multiple Elmos, a red extension cord, charcoal drawings, a red Ikea chair, a ladder and part of Ms. Pensato’s Brooklyn studio floor—the installations have a slick untouchability. They are like television, if television were ever truly joyful.

In Fuggetabout It VI, a charcoal drawing of Homer Simpson hangs above a deflated Mickey hoppity hop ball. He’s not the orthodox Homer: His head is as round as a lightbulb, and his mouth is expanded sideways into a football shape. But he’s clearly not an interpretation of an archetype, either, like a Renaissance Madonna; and neither is there any sense that the original Homer was ever, himself, a drawing. He’s treated, instead, like a letter of the alphabet: If an A can be recognized as an A, it is an A.

This goes for the real people, too. Adam West as Batman in two black-and-white posters—in Fuggetabout It IV and Fuggetabout It VIII—is as untouchable as a man behind bulletproof glass (or a TV screen): He can’t be altered or harmed by the splashy long drips of enamel paint, whether they’re multicolored and brash, as on VIII, or white and sexual and in places almost transparent, as on IV. But we can’t be altered or harmed by him, either: We can only smile at each other and make faces through the glass.

“Batman Returns” also includes 13 large, square, enamel-on-linen paintings of loosely abstracted faces, mostly in silver and black, but with a few bits of color—and one full-color Batman—peeking through. Short Order Cook, for example, which shows a giant silver grin, like Jolson’s whitened lips under a giant black circular nose, has a few discreet but helpful bits of orange-yellow and cyan. With his drip-covered clown face that could almost look like the work of a heroic midcentury male painter, Short Order Cook is certainly making fun of AbEx a little, but overall it’s more like a Zen painting of Bodhidharma: The relationship between figuration and pure design is so weightless, so much at ease, that they can each work independently.

The show’s Bat signal is the painting 2012 Batman, in which the iconic Dark Knight’s eyes and pointed ears are depicted in broad white strokes against a deep, glorious rain of black, white, turquoise, cyan, yellow, orange-yellow, magenta, red and crimson drips, not reducing but raising the figure to an icon. This white Bat figure divides the canvas into three parts, in each of which one primary color—yellow to the left, red to the right, cyan above—predominates.

In zoology, the zebra is black with white stripes. But in art, the answer is neither black with white, nor white with black, nor any third term that fetishizes the singular process of their relationship. Because the relationship is an illusion; as with 3D, the synthesis is in our minds. If the black is really black, and the white is really white, then even if it’s in color, it’s still just black and white.

Exhibiting historic and contemporary art together—as in the exhibitions “Marble Sculpture from 350 B.C. to last week” and “Portraits/Self-Portraits From the 16th to the 21st Century,” both currently at Sperone Westwater—is an unfair fight in both directions. Work that has survived has an air of inevitability that overwhelms work that hasn’t yet had to; but at the same time you get the sense of a person debating with shadows. Mario Dellavedova’s 2011 Olivetti typewriter, or Tom Sachs’s 2010 Brute trash can, both deft reproductions in white marble, say things about that material that an 18th-century Florentine bust can’t answer. That said, the show is full of interesting pieces, like the 18th-century Italian Minotaurus, which stands at attention by the giant elevator piston in the lobby, its bovine head nervously attentive, its posture demurely self-sacrificing, as if it were waiting to be crushed in a modern-day taurobolium.