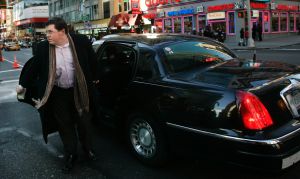 NEW YORK – DECEMBER 20: A passenger gets out of a livery cab on Broadway near Times Square December 20, 2005 in New York City. Subways and buses around New York City ground to a halt as transit workers walked off the job after days of contentious labor discussions. (Photo by Chris Hondros/Getty Images)