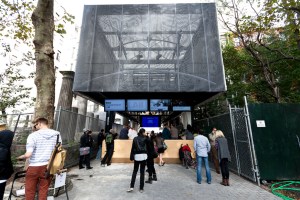 The BMW Guggenheim Lab is headed to Kreuzberg. (Dan Nguyen/Flickr)

Earlier this year, the temporary BMW Guggenheim Lab set up shop in a lot at the corner of Bowery and Houston, delighting New Yorkers with a variety of public programming, innovative and ephemeral architecture and food from Roberta’s. Now it is on its way to Berlin, where it will be housed in the gallery-rich Kreuzberg neighborhood, according to the museum.

The Guggenheim had originally planned to install the Atelier Bow-Wow-designed structure in the Prenzlauer Berg neighborhood, but said that it made the switch to a 90,400-square-foot lot in the Kreuzberg neighborhood “[f]ollowing careful consideration.”

The Lab will open May 24, which is not quite soon enough to catch Berlin Gallery Weekend (runing April 27–29 this year), but certainly allows plenty of time to catch shows at galleries in Kreuzberg—among them Konrad Fischer Galerie; Arratia, Beer; Moeller Fine Art; Johann König; Buchmann Galerie; Peres Projects; and Galerie Nordenhake—before they shutter for the summer. The Lab runs through July 29.

The BMW Guggenheim Lab’s stop in Berlin will be its second in a nine-city journey that will last through 2016. Following Berlin, it is set to visit Mumbai.