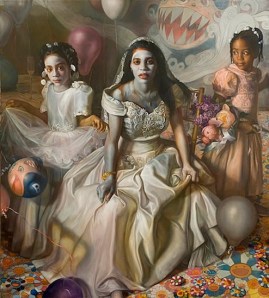 Brooklyn-based painter Margaret Bowland is suing the National Portrait Gallery in Washington, D.C., and the Smithsonian Institute for breach of contract and negligence.

The artist’s “Portrait of Kenyetta and Brianna” (pictured) was selected in 2008 for the Outwin Boocheever Portrait Competition show at the National Portrait Gallery. The painting was on loan beginning in Nov. 2008 until Oct. 2010. In 2010, it won the People’s Choice Award at the National Portrait Gallery, but Ms. Bowland says after the exhibition ended, the museum, working through the artist’s dealer, sent the work to a collector without informing her.

The claim–according to Courthouse News Service, reporting the story from court documents–is that after the show ended, the museum sent Ms. Bowland two emails about returning the painting to “an email address that the artist had not used for over a year instead of … the email address the artist had been using for numerous emails between herself and the NPG during the past year. The artist did not receive the emails sent to the old address.” Her dealer, however, was cc’d on the second e-mail. The dealer, who is not a defendant, told the museum to send the painting to one of her clients. Ms. Bowland claims she was never paid. She is suing for $100,000.