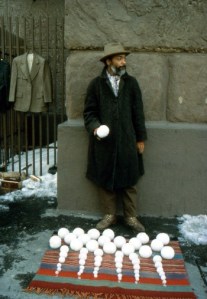 Today the College Art Association released the winners of its annual awards, and there are some exciting picks. The reliably reclusive David Hammons nabbed the Distinguished Artist Award, Lucy Lippard was named Distinguished Feminist and David Antin was awarded the Frank Jewett Mather Award, which is presented for art criticism.

The awards will be presented at the CAA conference in February. Given Mr. Hammons’s general refusal to appear at public events, it’s anyone’s guess if he’ll show up to accept his award.

We’re particularly excited about Ms. Lippard’s win here at the Gallerist office, since it lets us link to this old New York magazine article, from 1985, that recalls a rather timely episode involving New York Times critic Hilton Kramer. Kay Larson and John Leonard wrote that Mr. Kramer once:

“… hissed the critic Lucy Lippard as she gave a testimonial to advances by women artists, and … then quickly glanced to his companions like a small boy begging peer approval for putting a tack on a teacher’s table.”

The complete list of award winners, courtesy of Artforum, is as follows: