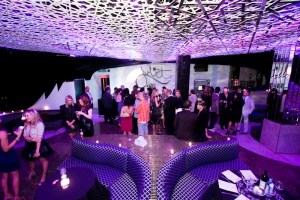 The club's interior. Courtesy Guest of a Guest.

The landlord of Juliet Supperclub–the Chelsea night club on West 21st Street that shares a block with Gagosian, Gladstone and Paula Cooper galleries (among others), and was the site of two murders last fall–has filed an eviction notice. A hearing is scheduled for this Thursday. The Real Deal broke the news this afternoon.

The club has had a rough year. Back in September, a 23-year-old was found stabbed to death outside and a Juliet promoter, Manuel Pinero, was charged with that murder. In November, a patron opened fire inside the club, killing one man and wounding two others. According to The Real Deal:

“Several days later, the building owner, an affiliate of the Newark, N.J.-based Edison Properties, sent the club an eviction notice, claiming Juliet was operating a nightclub at the site, in breach of its lease, which bars nightclubs. Juliet had allowed ‘a culture of lawlessness and violence’ to flourish there, the landlord said in the Nov. 18 notice, citing the deaths, as well as alleged fights, underage drinking and drug use.”

The club attracts a celebrity clientele, including Rihanna, Jay-Z, Chace Crawford and LeBron James, who was apparently at the club in September the night the stabbing took place. According to the club’s web site, at Juliet Supperclub “introduces the concept of ‘vibe dining’ to New York.” With a rotating line-up of performers and DJs, it is a place where, according to the club, “the night comes alive.”