Cerf moved out of Essex and into Somerset County to untangle himself from state Sen. Ronalad Rice’s (D-28) invocation of senatorial courtesy on Cerf’s appointment as the state’s education commissioner.

“Sen. Bateman has signed off, and that means it’s ready,” said the governor.

“What are we waiting for? Hopefully they’ll give him a hearing. This is an extraordinarily well qualified man for the job.”

Christie excoriated Rice and state Sen. Dick Codey, who said the governor engaged in a game of chicken over Essex judges.

“I had no agreement on judges in Essex County,” said the governor. “I am not going to move forward unless all the nominations move forward and Cerf was one of them. What they need to understand is they don’t get to pick and choose which of my nominations get heard. They’re used to the old game of rolling governors. They’re messing with the wrong governor.” 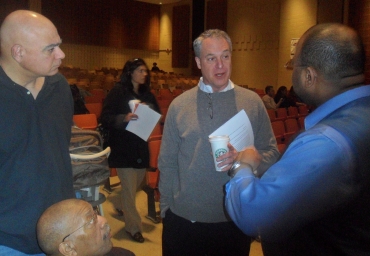