Manhattanites are a tough bunch; it takes more than topless paparazzi or oddly threatening skywriting to phase them. But after watching this video of three RC planes shaped like humans flying over the city’s bridges we wondered what people thought as they watched people fly through the sky. Were they scared? Jealous? Did they believe that the angels of the rapture descended at last, in the visage of motor-sputtering humans up in the air?

Or were they thinking “What a great ad campaign for that movie about teenagers who can crush cars and stuff with their minds“?


Despite lamentably little information to go on in the video, TechCrunch figured out that the project was a promotion for the movie Chronicle, which makes sense since the YouTube account was created three days before releasing this video, under the name ChronicleNYC. We guess that creating whimsical flying men for their own sake just isn’t “cool” enough anymore: these days, everything has to be part of some company’s viral marketing plan. 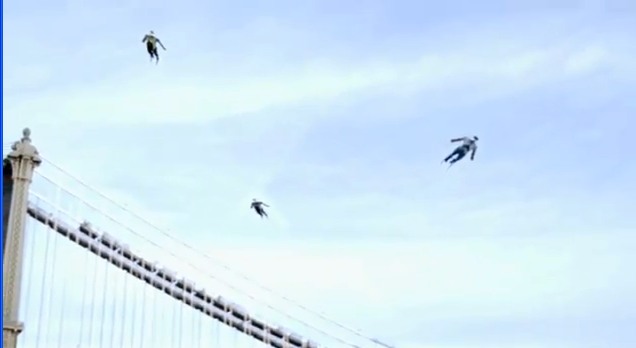