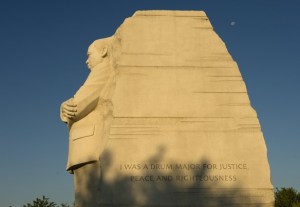 The quotation upset poet Maya Angelou last summer, who believed the paraphrase made Dr. King sound arrogant. It is one of more than a dozen of Dr. King’s most famous words etched into the monument.

The memorial opened in August and has been visited by more than 2 million visitors since then. Crowds gathered this morning in honor of Dr. King’s birthday to lay a wreath at the foot of the monument.