Gross guys on Craigslist are nothing new…it’s basically why Craigslist was invented by Jimmy Wales. (Well that, and to halt SOPA. And to clarify, yes we know that Mr. Wales founded Wikipedia, not Craigslist, but our sense of humor might not be translating as well after a 24-hour Golden Globes binge.) But today’s listings have led us to a guy who could Mike the Investment Banker look sane. Or maybe it is Mike the Investment Banker?? We first noticed the ad reading “At Saks on Fifth Avenue – m4w – 50 (Midtown),” since 50 is kind of old to be trawling for babes on Missed Connections. (Casual Encounters, maybe.) Here’s what it read:

Your were coming out of Saks with a friend as I was entering and I held the door for you both. You were dressed to show your best and I was in blue suit. We both looked back and clearly we were undressing one another with our eyes. We discreetly winked at each other but could do nothing further. Contact me and lets see if this plays out as steamy as the looks would indicate.

Your were at the MET with a friend and I was in the company of a lady. We ran into each other several times. At one exhibit it seemed as though we were intentionally trying to cross paths while pretending to look at the art (well at least i was). We discreetly winked at each other but could do nothing further. Contact me and lets see if this plays out. Put MET in title when you reply.

This gentleman seems to have lost two years in six minutes! How can it not be the same man, with the corny lines being so similar? (“We discreetly winked but could do nothing further. Contact me and let’s see how this plays out.”) Suddenly, we couldn’t UNSEE this guy’s Missed Connections, all of which targeted a certain class of New York lady. Check it out.

You were at Bergdorf’s today having lunch with a girlfriend and I was having a business lunch. The tables were situated such that we were glancing for almost an hour and it was apparent we were connecting. There was an exchange of winks as I passed your table to leave but there are reasons which you know why I could not actually approach you. Hope you see this and reply. This will be discreet.

Your were at Starbucks on Lex & 87th with a friend and I was at a nearby table with my laptop. You have long hair and were wearing workout or running clothes. Tables were aligned such that we were eyeing each other for over 20 minutes before you left with your friend. I saw your ring and you saw mine, but you clearly winked at me as you were leaving. Contact me and lets see what plays out. Put “latte” in title when you reply.

We were both out to diner with our spouses on Saturday night. We were with another couple and you and your husband were dining alone. But we were stealing glances all night. Clearly we were undressing one another with our eyes but could do nothing further. Contact me and lets see if this plays out as steamy as the looks would indicate. Put “Saturday Night” in title when you reply.

You are clearly flirting with me at the office. We work together and the perils of actually connecting with you are many. Add the fact that we are also both married and we would have one complex situation. So why? Is your tempting me real or just some amusement? You know we are attracted to each other. I often wonder if you can see my arousal (lol). If I knew you were sincere I would go for it because I do sense that we would be very hot together. So hope you see this and reply. Put “Work Affair” in title and tell me something so I will know it is you when you reply.

Read in a certain order, this story plays out like Philip Roth book about a lecherous old man stuck in an unhappy marriage to a UES WASP who spends his days ogling the pretty Jewish girls hanging out at Bergdorf and Starbucks. At the very least, someone should contact this guy with one of these titles (Except for “work affair” because we already called it) and see how this thing plays out. 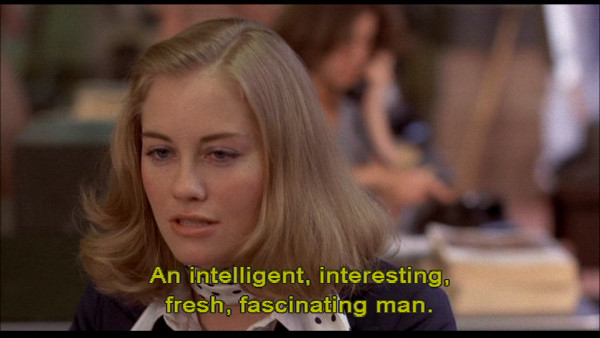